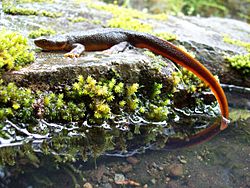 Showing something of its red underside

The rough-skinned newt (Taricha granulosa) is a North American newt known for its strong poison.

Juveniles live on land for four or five years after metamorphosis. Adults are amphibious, and live in water and on land. Eggs are laid in water. They can be found especially after there has been a lot of rain.

Many newts make toxin in their skin to avoid predation, but the rough-skinned newt is especially poisonous. Toxicity is generally experienced only if the newt feels threatened, although sometimes skin irritation can be experienced after touching it.

Throughout much of the newt’s range, the common garter snake (Thamnophis sirtalis) is resistant to the newt's toxin. In several populations, these snakes successfully prey upon the newts. Toxin resistant garter snakes are the only known animals today that can eat a T. granulosa newt and survive.

This cycle of a predator and prey co-evolving is sometimes called an evolutionary arms race. In this case it results in the newts producing levels of toxin far in excess of what is needed to kill any other conceivable predator.

Toxic animals usually warn predators that they are not good food. There's no point in being toxic unless it helps survival and reproduction. The underside of these newts is vividly coloured a yellow-orange. When a threat appears, the newt curls up its tail and lifts its head to show the warning colour. This can be seen in photographs.

Habitats of rough-skinned newts are found throughout the west coast of the United States and British Columbia. The southern range extends to California and the northern in Alaska.

All content from Kiddle encyclopedia articles (including the article images and facts) can be freely used under Attribution-ShareAlike license, unless stated otherwise. Cite this article:
Rough-skinned newt Facts for Kids. Kiddle Encyclopedia.