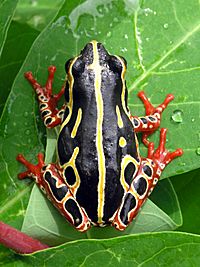 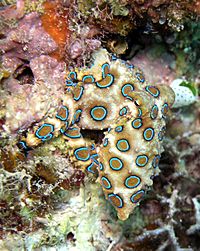 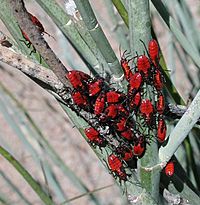 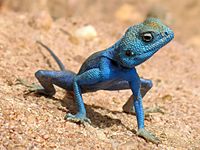 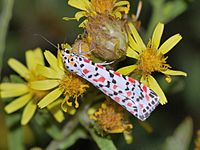 Warning colouration (or aposematism) is how animals let other animals know that they are poisonous or dangerous. It is the exact opposite of camouflage. Warning colours are usually some combination of red, yellow, black and white.

Animals with warning colours move slowly and expose themselves to sight. The sluggishness and exposure helps to advertise their defence. Along with the colour and behaviour often goes the foul smell of their chemical weapons. The grasshopper Aularches miliaris is a very good example. Noxious caterpillars often have thick, leathery cuticles which help them to resist young birds making a 'test'. When the bird takes a peck, disgusting fluid seeps out from special glands on its back. The caterpillar (or other larva) will often survive such an attack, and the young bird has learnt a lesson it will never forget. All in all, the predator is given good warning. Tests show that warning colours definitely do deter predators.