Poison dart frog is the common name of a group of frogs in the family Dendrobatidae. They are native to Central and South America.

Unlike most frogs, these are active during the day.

They often have brightly-coloured bodies, which act as warning colouration.

Many species are critically endangered.

Blue poison dart frogs are poisonous because they eat ants and other small insects that have toxins in their bodies. If an animal eats the frog, it will become very sick.

Dart frogs are the focus of major phylogenetic studies, and undergo taxonomic changes frequently. Family Dendrobatidae was revised taxonomically in 2006 and contains 12 genera, with about 170 species.

Some poison dart frogs species include a number of colour morphs that emerged as recently as 6,000 years ago.

Predation may have influenced the evolution of polymorphism in O. granulifera, while sexual selection appears to have contributed to differentiation among the Bocas del Toro populations of Oophaga pumilio. 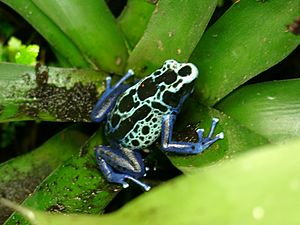 Most species of poison dart frogs are small, sometimes less than 1.5 cm (0.59 in) in adult length, although a few grow up to 6 cm (2.4 in) in length. They weigh 1 oz. on average. Most poison dart frogs are brightly colored, displaying aposematic patterns to warn potential predators. Their bright coloration is associated with their toxicity and levels of alkaloids. For example, frogs of the genus Dendrobates have high levels of alkaloids, whereas Colostethus species are cryptically colored and are not toxic.

Poison dart frogs are an example of an aposematic organism. Their bright coloration advertises unpalatability to potential predators. Aposematism is currently thought to have originated at least four times within the poison dart family according to phylogenetic trees, and dendrobatid frogs have since undergone dramatic divergences – both interspecific and intraspecific – in their aposematic coloration. This is surprising given the frequency-dependent nature of this type of defense mechanism.

Adult frogs lay their eggs in moist places, including on leaves, in plants, among exposed roots, and elsewhere. Once the eggs hatch, the adult piggybacks the tadpoles, one at a time, to suitable water, either a pool, or the water gathered in the throat of bromeliads or other plants. The tadpoles remain there until they metamorphose, fed by unfertilized eggs laid at regular intervals by the mother. 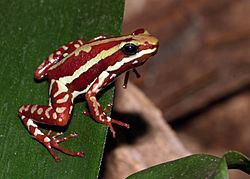 Natural habitats include subtropical and tropical, moist, lowland forests, subtropical or tropical high-altitude shrubland, subtropical or tropical, moist, montanes and rivers, freshwater marshes, intermittent freshwater marshes, lakes and swamps. Other species can be found in seasonally wet or flooded lowland grassland, arable land, pastureland, rural gardens, plantations, moist savanna and heavily degraded former forest. Premontane forests and rocky areas have also been known to hold frogs. Dendrobatids tend to live on or close to the ground, but also in trees as much as 10 m (33 ft) from the ground. 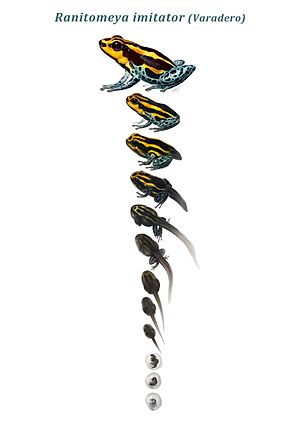 Many species of poison dart frogs are dedicated parents. Many poison dart frogs in the carry their newly hatched tadpoles into the canopy; the tadpoles stick to the mucus on the backs of their parents. Once in the upper reaches of the rainforest trees, the parents deposit their young in the pools of water that accumulate in epiphytic plants, such as bromeliads.

The tadpoles feed on invertebrates in their nursery, and their mother will even supplement their diet by depositing eggs into the water. Other poison frogs lay their eggs on the forest floor, hidden beneath the leaf litter.

In general, females have a choice of mate. In turn, males show brighter coloration, are territorial, and are aggressive toward other males. Females select mates based on coloration (mainly dorsal), calling perch location, and territory.

Many poison dart frogs secrete alkaloid toxins through their skin. Alkaloids in the skin glands of poison frogs serve as a chemical defense against predation, and they are therefore able to be active alongside potential predators during the day. About 28 structural classes of alkaloids are known in poison frogs. The most toxic of poison dart frog species is Phyllobates terribilis. It is argued that dart frogs do not synthesize their poisons, but sequester the chemicals from arthropod prey items, such as ants, centipedes and mites – the diet-toxicity hypothesis. Because of this, captive-bred animals do not possess significant levels of toxins as they are reared on diets that do not contain the alkaloids sequestered by wild populations. Nonetheless, the captive-bred frogs retain the ability to accumulate alkaloids when they are once again provided an alkaloid-containing diet.

Most wild species are not lethal to their predators, but rather taste foul enough that frogs are released immediately. Despite the toxins used by some poison dart frogs, some predators have developed the ability to withstand them. One is the snake Leimadophis epinephelus, which has developed immunity to the poison.

Chemicals extracted from the skin of Epipedobates tricolor may be shown to have medicinal value. Scientists use this poison to make a painkiller. One such chemical is a painkiller, called epibatidine; however, the therapeutic dose is very close to the fatal dose. A derivative ABT-594 developed by Abbott Laboratories, called Tebanicline got as far as Phase II trials in humans, but was dropped from further development due to unacceptable incidence of gastrointestinal side effects. Secretions from dendrobatids are also showing promise as muscle relaxants, heart stimulants and appetite suppressants. The most poisonous of these frogs, the golden poison frog (Phyllobates terribilis), has enough toxin on average to kill ten to twenty men or about ten thousand mice. Most other dendrobatids, while colorful and toxic enough to discourage predation, pose far less risk to humans or other large animals. 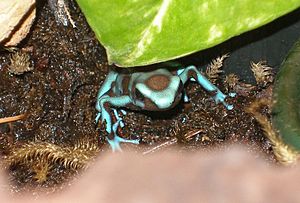 All species of poison dart frogs are Neotropical in origin. Wild-caught specimens can maintain toxicity for some time (this can be obtained through a form of bioaccumulation), so appropriate care should be taken when handling them. While scientific study on the lifespan of poison dart frogs is scant, retagging frequencies indicate it can range from one to three years in the wild. However, these frogs typically live for much longer than that in captivity, having been reported to live as long as 25 years. These claims also seem to be questionable, since many of the larger species take a year or more to mature, and Phyllobates species can take more than two years. In captivity, most species thrive where the humidity is kept constant at 80 to 100% and where the temperature is around 72 °F (22 °C) to 80 °F (27 °C) during the day and no lower than 60 °F (16 °C) to 65 °F (18 °C) at night. Some species tolerate lower temperatures better than others.

Many species of poison dart frogs have recently experienced habitat loss, chytrid diseases, and collection for the pet trade. Some are listed as threatened or endangered as a result. Zoos have tried to counteract this disease by treating captive frogs with an antifungal agent that is used to cure athlete's foot in humans.

All content from Kiddle encyclopedia articles (including the article images and facts) can be freely used under Attribution-ShareAlike license, unless stated otherwise. Cite this article:
Poison dart frog Facts for Kids. Kiddle Encyclopedia.