Kids Encyclopedia Facts
Not to be confused with Guinea.

Its prefecture and largest city is Cayenne.

Guiana comes from an Amerindian language (Arawak) that means "land of many waters". The addition of the word "French" in most languages other than French comes from colonial times when there were five in the region; they were, from west to east:

French Guiana and the two larger countries to the north and west, Guyana and Suriname, are still often collectively referred to as the Guianas and form the Guiana Shield. 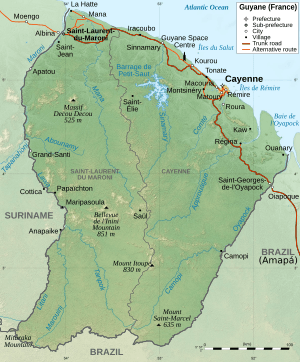 French Guiana borders two countries: Surinam to the west, and Brazil to the east and south. To the north is the Atlantic Ocean. There are two main geographical regions: a coastal strip where the majority of the people live, and a dense rainforest which gradually rises to the modest peaks of the Tumuc-Humac mountains along the Brazilian frontier.

Several small islands are found off the coast, the three Îles du Salut which include Devil's Island, and the isolated Îles du Connétable further along the coast towards Brazil.

The Petit-Saut Dam in the north of the department forms an artificial lake and provides hydroelectricity. There are many rivers in French Guiana.

It is the French department with more forests, 98% of the department is covered with an equatorial forest.

As of 2007[update], the Amazon rainforest in the most southern part of the department, is protected as the Guiana Amazonian Park, one of the ten national parks of France. The territory of the park covers some 33,900 square kilometres (13,100 sq mi) in the communes of Camopi, Maripasoula, Papaïchton, Saint-Élie and Saül.

The climate in Cayenne, at an altitude of 9 m (30 ft) above sea level, is of the subtype Af (Tropical Rainforest Climate also known as Equatorial Climate) in the Köppen climate classification.

The department of French Guiana is managed by the Collectivité territorial de la Guyane in Cayenne.

The 22 communes in the department are:

The inhabitants of French Guiana are known, in French, as Guyanais (women: Guyanaises).

French Guiana has a population, in 2014, of 252,338, for a population density of 3.0 inhabitants/km2. The city with more people living in it is the capital, Cayenne (55,817 inhabitants). The subprefecture of Saint-Laurent-du-Maroni has 44,169 inhabitants.

The main traditional industries are fishing, gold mining and timber. In addition, the Guiana Space Centre has played a significant role in the local economy since it was established in Kourou in 1964.

Three Islands off the countires coast were USed by the French Government from 1852 to 1953 as Prison Islands. They were:

Convicts who were sentenced to more than 8 years and survied and served their terms could not return to France but were required to stay on as involunatary settlers for the rest of their lives.
Famous Inmate:

All content from Kiddle encyclopedia articles (including the article images and facts) can be freely used under Attribution-ShareAlike license, unless stated otherwise. Cite this article:
French Guiana Facts for Kids. Kiddle Encyclopedia.