The leatherback sea turtle is the largest of all living sea turtles. It is the fourth largest modern reptile behind three crocodilians.

The eggs and young are often eaten by predators, but the adults can defend themselves aggressively. Only the largest sea predators can tackle a leatherback successfully.

Leatherback turtles are one of the deepest diving marine animals. They have been recorded diving to depths as great as 1,280 metres (4,200 ft).

They can live as far north as Alaska and Norway and as far south as the Cape of Good Hope in Africa and the southernmost tip of New Zealand. The leatherback is found in all tropical and subtropical oceans, and it also goes well into the Arctic Circle.

Leatherback turtles can be found primarily in the open ocean. Scientists tracked a leatherback turtle that swam from Jen Womom beach of Tambrauw regency in West Papua province of Indonesia to the U.S. in a 20,000 km (12,000 mi) foraging journey over a period of 647 days. Leatherbacks follow their jellyfish prey throughout the day, resulting in turtles "preferring" deeper water in the daytime, and shallower water at night (when the jellyfish rise up the water column). This hunting strategy often places turtles in very frigid waters. One individual was found actively hunting in waters that had a surface temperature of 0.4 °C. (32.72 °F). Leatherback turtles are known to pursue prey deeper than 1000 m—beyond the physiological limits of all other diving tetrapods except for beaked whales and sperm whales.

Their favored breeding beaches are mainland sites facing deep water, and they seem to avoid those sites protected by coral reefs. 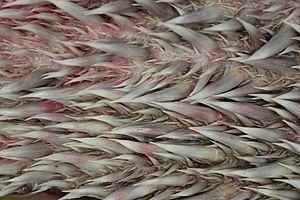 Several species of sea turtles commonly ingest plastic marine debris, and even small quantities of debris can kill sea turtles by obstructing their digestive tracts. Nutrient dilution, which occurs when plastics displace food in the gut, affects the nutrient gain and consequently the growth of sea turtles. Ingestion of marine debris and slowed nutrient gain leads to increased time for sexual maturation that may affect future reproductive behaviors. These turtles have the highest risk of encountering and ingesting plastic bags offshore of San Francisco Bay, the Columbia River mouth, and Puget Sound.

Very little is known of the species' lifespan. Some reports claim "30 years or more", while others state "50 years or more". Upper estimates exceed 100 years.

Dead leatherbacks that wash ashore are microecosystems while decomposing. In 1996, a drowned carcass held sarcophagid and calliphorid flies after being picked open by a pair of Coragyps atratus vultures. Infestation by carrion-eating beetles of the families Scarabaeidae, Carabidae, and Tenebrionidae soon followed. After days of decomposition, beetles from the families Histeridae and Staphylinidae and anthomyiid flies invaded the corpse, as well. Organisms from more than a dozen families took part in consuming the carcass.

Leatherback turtles face many predators in their early lives. Eggs may be preyed on by a diversity of coastal predators, including ghost crabs, monitor lizards, raccoons, coatis, dogs, coyotes, genets, mongooses, and shorebirds ranging from small plovers to large gulls. Many of the same predators feed on baby turtles as they try to get to the ocean, as well as frigatebirds and varied raptors. Once in the ocean, young leatherbacks still face predation from cephalopods, requiem sharks, and various large fish. Despite their lack of a hard shell, the huge adults face fewer serious predators, though they are occasionally overwhelmed and preyed on by very large marine predators such as killer whales, great white sharks, and tiger sharks. Nesting females have been preyed upon by jaguars in the American tropics.

Apparently, the adult leatherback aggressively defends itself at sea from predators. A medium-sized adult was observed chasing a shark that had attempted to bite it and then turned its aggression and attacked the boat containing the humans observing the prior interaction. Dermochelys juveniles spend more of their time in tropical waters than do adults.

Adults are prone to long-distance migration. Migration occurs between the cold waters where mature leatherbacks feed, to the tropical and subtropical beaches in the regions where they hatch. In the Atlantic, females tagged in French Guiana have been recaptured on the other side of the ocean in Morocco and Spain. 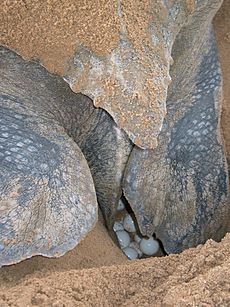 While other sea turtle species almost always return to their hatching beach, leatherbacks may choose another beach within the region. They choose beaches with soft sand because their softer shells and plastrons are easily damaged by hard rocks. Nesting beaches also have shallower approach angles from the sea. This is a vulnerability for the turtles because such beaches easily erode. They nest at night when the risk of predation and heat stress is lowest. As leatherback turtles spend the vast majority of their lives in the ocean, their eyes are not well adapted to night vision on land. The typical nesting environment includes a dark forested area adjacent to the beach. The contrast between this dark forest and the brighter, moonlit ocean provides directionality for the females. They nest towards the dark and then return to the ocean and the light. 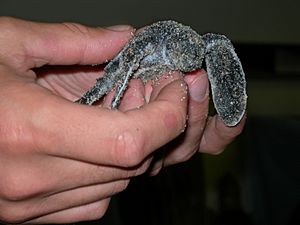 Females excavate a nest above the high-tide line with their flippers. One female may lay as many as nine clutches in one breeding season. About nine days pass between nesting events. Average clutch size is around 110 eggs, 85% of which are viable. After laying, the female carefully back-fills the nest, disguising it from predators with a scattering of sand.

Cleavage of the cell begins within hours of fertilization, but development is suspended during the gastrulation period of movements and infoldings of embryonic cells, while the eggs are being laid. Development then resumes, but embryos remain extremely susceptible to movement-induced mortality until the membranes fully develop after incubating for 20 to 25 days. The structural differentiation of body and organs (organogenesis) soon follows. The eggs hatch in about 60 to 70 days. As with other reptiles, the nest's ambient temperature determines the sex of the hatchings. After nightfall, the hatchings dig to the surface and walk to the sea.

Leatherback nesting seasons vary by location; it occurs from February to July in Parismina, Costa Rica. Farther east in French Guiana, nesting is from March to August. Atlantic leatherbacks nest between February and July from South Carolina in the United States to the United States Virgin Islands in the Caribbean and to Suriname and Guyana.

People around the world still harvest sea turtle eggs. Asian exploitation of turtle nests has been cited as the most significant factor for the species' global population decline. In Southeast Asia, egg harvesting in countries such as Thailand and Malaysia has led to a near-total collapse of local nesting populations. In Malaysia, where the turtle is practically locally extinct, the eggs are considered a delicacy. In the Caribbean, some cultures consider the eggs to be aphrodisiacs.

They are also a major jellyfish predator, which helps keep populations in check. This bears importance to humans, as jellyfish diets consist largely of larval fish, the adults of which are commercially fished by humans.

All content from Kiddle encyclopedia articles (including the article images and facts) can be freely used under Attribution-ShareAlike license, unless stated otherwise. Cite this article:
Leatherback sea turtle Facts for Kids. Kiddle Encyclopedia.