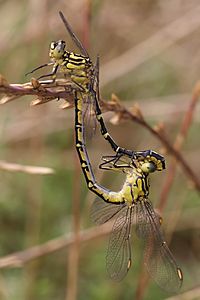 Mating is the pairing of opposite-sex or hermaphrodite organisms. It is usually for sexual reproduction. Some definitions limit the term to pairing between animals. Other definitions extend the term to crossing in plants and fungi. It is usual for mating in plants or fungi to be called cross-fertilization, or "crossing" if the offspring have DNA from both genetic sources.

Copulation is the union of the sex organs of two sexually reproducing animals for internal fertilization. Fertilization is the actual fusion of gametes.

Mating may also lead to external fertilization. This is done by amphibians, most fish, many lower animals, and plants. Many aquatic species just spread their eggs and sperm in the water at one specific time of year. That time varies between species.

In some birds, mating includes behaviors such as nest-building and feeding offspring. The human practice of artificial insemination of domesticated animals is part of animal husbandry.

All content from Kiddle encyclopedia articles (including the article images and facts) can be freely used under Attribution-ShareAlike license, unless stated otherwise. Cite this article:
Mating Facts for Kids. Kiddle Encyclopedia.