Animal husbandry is the care and breeding of animals, particularly livestock. People have done this for a very long time; it is much older than agriculture. Nomadic people and people In rural areas often teach their children how to care for their animals. 4-H is an organization that also teaches children in the United States how to raise and care for farm animals.

Examples of animal husbandry are:

Animal husbandry includes domestication of animals to obtain animal products (like milk, meat, wool, leather), and use them for transportation. 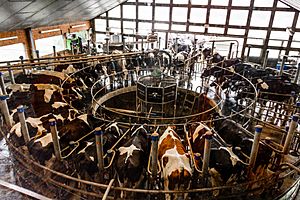 Dairy farming is a branch of animal husbandry whereby dairy animals are raised for their milk. The cow is mainly used throughout the world to produce milk and milk products for human consumption. Other animals used to a lesser extent for this purpose include sheep, goats, camels, buffaloes, yaks, reindeer, horses and donkeys. In the past, cows were kept in small herds on family farms, grazing pastures and fed hay in winter, nowadays they are kept in larger herds, more intensive systems and the feeding of silage. 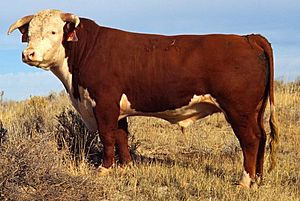 The Hereford is a hardy breed of beef cattle, now raised in many countries around the world

Many animals are raised for their meat. Meat, mainly from farmed animals, is a major source of dietary protein around the world. Cattle generally produce a single offspring annually which takes more than a year to mature; sheep and goats often have twins and these are ready for slaughter in less than a year; pigs give birth to more than one litter of up to about 11 piglets each year. Horses, donkeys, deer, buffalo, llamas, alpacas, guanacos and vicunas are farmed for meat in various regions. 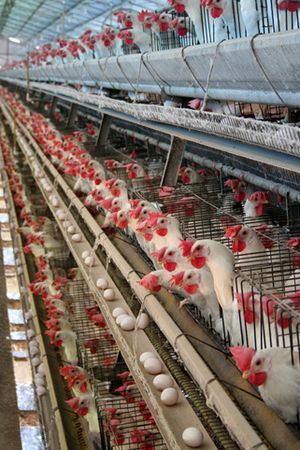 All content from Kiddle encyclopedia articles (including the article images and facts) can be freely used under Attribution-ShareAlike license, unless stated otherwise. Cite this article:
Animal husbandry Facts for Kids. Kiddle Encyclopedia.