The jaguar is a wild cat species and the only member of the genus Panthera native to the Americas. The jaguar's present range extends from Southwestern United States and Mexico and across much of Central America. Though there are single cats now living within the western United States, the species has largely been extirpated from the United States since the early 20th century. It is listed as Near Threatened on the IUCN Red List; and its numbers are declining. Threats include loss and fragmentation of habitat.

The jaguar is the largest cat species in the Americas and the third-largest after the tiger and the lion. This spotted cat closely resembles the leopard, but is usually larger and sturdier. It ranges across a variety of forested and open terrains. The jaguar enjoys swimming and is largely a solitary, opportunistic, stalk-and-ambush predator at the top of the food chain. As a keystone species it plays an important role in stabilizing ecosystems and regulating prey populations. 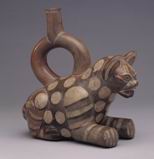 The cat is frequently killed, particularly in conflicts with ranchers and farmers in South America. Although reduced, its range remains large. Given its historical distribution in pre-Columbian Central and South America, the jaguar was a symbol of power and strength. Among the Andean cultures, a jaguar cult disseminated by the early Chavín culture became accepted over most of what is today Peru by 900 BC.

The jaguar, a compact and well-muscled animal, is the largest cat in the New World and the largest carnivorous mammal in Central and South America. Its coat is generally a tawny yellow, but ranges to reddish-brown, for most of the body. The ventral areas are white. The fur is covered with rosettes for camouflage in the light of its forest habitat. The spots and their shapes vary between individual jaguars. Forest jaguars are frequently darker and considerably smaller than those in open area's.

The jaguar stands 63 to 76 cm (25 to 30 in) tall at the shoulders. Compared to the similarly colored leopard, the jaguar is bigger, heavier and relatively stocky in build. A short and stocky limb structure makes the jaguar adept at climbing, crawling, and swimming. The animal has a very powerful bite, even compared to other big cats. Because of its this jaguars can bite through armoured reptiles like caimans, crocodiles, turtles and tortoises. 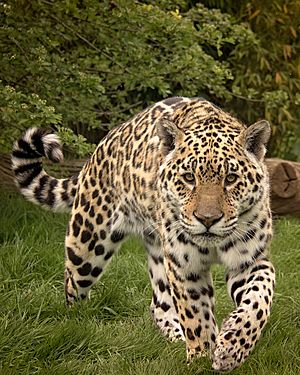 Sofia, one of the beautiful Jaguars at The Big Cat Sanctuary

While the jaguar closely resembles the leopard, it is sturdier and heavier, and the two animals can be distinguished by their rosettes: the rosettes on a jaguar's coat are larger, fewer in number, usually darker, and have thicker lines and small spots in the middle that the leopard lacks. Jaguars also have rounder heads and shorter, stockier limbs compared to leopards.

At present, the jaguar's range extends from Mexico through Central America to South America, including much of Amazonian Brazil. Jaguars are strong swimmers and climbers, and they often prefer to live by rivers, in swamps, and in dense forest with thick cover for stalking prey.

Jaguars once lived as far north as the southwestern United States. The last wild jaguar in the United States died around 1960. Some of these cats are once again migrating north from Mexico.

In the early 20th century, the jaguar's range extended as far north as the Grand Canyon and possibly Colorado, and as far west as Monterey in Northern California. The jaguar is a protected species in the United States under the Endangered Species Act, which has stopped the shooting of the animal for its pelt. Jaguar skins are also treated as illegal contraband by the US government and otherwise by and large Americans have stopped wearing fur coats made of the pelts of spotted cats as citizens are aware of the international plight of big cats. 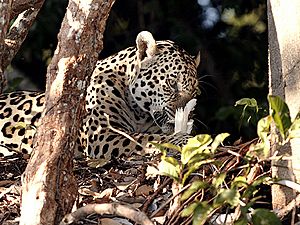 Jaguar with a bird

Like all cats, the jaguar is an obligate carnivore, feeding only on meat. It is an opportunistic hunter and its diet encompasses at least 87 species. When hunting, they usually try to secretly get very close to the prey, and then the jaguar suddenly jumps at it and throws it down. It then takes the prey to a safe place and eats it. The jaguar is often described as nocturnal, but is more specifically crepuscular (peak activity around dawn and dusk).

The jaguar is a stalk-and-ambush rather than a chase predator. The cat will walk slowly down forest paths, listening for and stalking prey before rushing or ambushing. The jaguar attacks from cover and usually from a target's blind spot with a quick pounce; the species' ambushing abilities are considered nearly peerless in the animal kingdom by both indigenous people and field researchers. The ambush may include leaping into water after prey, as a jaguar is quite capable of carrying a large kill while swimming; its strength is such that carcasses as large as a cow can be hauled up a tree to avoid flood levels.

Jaguars will sometimes wait by the water, hitting it occasionally with their tail. When fish are attracted by this, they swipe out with a paw, spearing the fish in their claws. 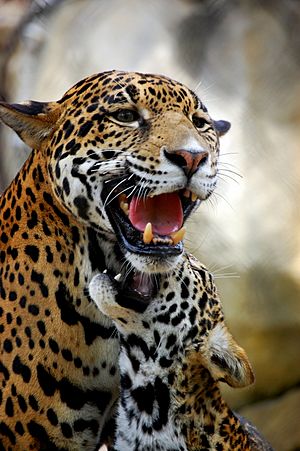 The jaguar is often described as nocturnal, but is more specifically crepuscular (peak activity around dawn and dusk). Both male and female hunt, but males travel farther each day than females, befitting their larger territories. The jaguar may hunt during the day if game is available and is a relatively energetic feline, spending as much as 50–60 percent of its time active. The jaguar's elusive nature and the inaccessibility of much of its preferred habitat make it a difficult animal to sight, let alone study.

Females provide all parenting. The gestation period lasts 93–105 days; females give birth to up to four cubs, and most commonly to two. The young are born blind, gaining sight after two weeks. Cubs are weaned at three months, but remain in the birth den for six months before leaving to accompany their mother on hunts. They will continue in their mother's company for one to two years before leaving to establish a territory for themselves. Young males are at first nomadic, jostling with their older counterparts until they succeed in claiming a territory. Typical lifespan in the wild is estimated at around 12–15 years; in captivity, the jaguar lives up to 23 years, placing it among the longest-lived cats.

All content from Kiddle encyclopedia articles (including the article images and facts) can be freely used under Attribution-ShareAlike license, unless stated otherwise. Cite this article:
Jaguar Facts for Kids. Kiddle Encyclopedia.