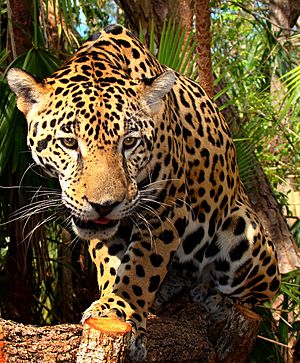 The jaguar is an example of a keystone species

A keystone species is a species which has a big effect on its environment relative to its numbers. The ecosystem depends on them, and would be much changed if they were not there. This is because they affect many other organisms in the ecosystem. They affect the types and numbers of other species in the community.

Some sea stars prey on sea urchins, mussels, and other shellfish that have no other natural predators. If the sea star is removed from the ecosystem, the mussel population explodes uncontrollably. This drives out most other species. The urchin population grows likewise, and destroys coral reefs. Living coral reefs are the habitat for many hundreds of other species.

Some other examples of keystone species are the sea otter, horseshoe crab, and wolves. Sea otters and kelp depend on each other. Without the sea otter, sea urchins would destroy the kelp, and much else in the ecosystem.

All content from Kiddle encyclopedia articles (including the article images and facts) can be freely used under Attribution-ShareAlike license, unless stated otherwise. Cite this article:
Keystone species Facts for Kids. Kiddle Encyclopedia.