Prairie dogs are a genus of ground squirrels. They are small, burrowing rodents which live in short-grass prairies and the high plains of western North America. The explorers Lewis and Clark sent a prairie dog to President Thomas Jefferson during their expedition; it was quite strange to him.

Prairie dogs are found in North America. In Mexico, they are mostly found in the northern states, which are the southern end of the great plains: northeastern Sonora, north and northeastern Chihuahua, northern Coahuila, northern Nuevo León, and northern Tamaulipas; in the U.S., they range primarily west of the Mississippi River, though they have also been introduced in a few eastern locales. They are also found in the Canadian Prairies. 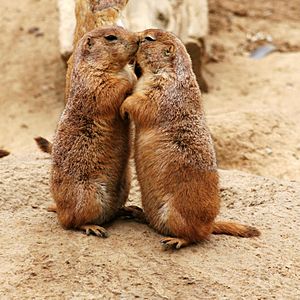 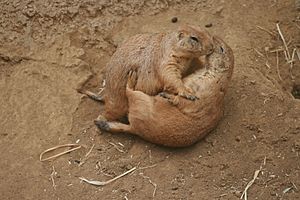 Highly social, prairie dogs live in large colonies – collections of prairie dog families that can span hundreds of acres. Families usually are made up of one male and two to four females living in a strict social hierarchy. Prairie dog pups reach sexual maturity at about 3 years of age, and after their third winter the dominant male in a given family will drive them away, forcing them to establish their own families on the edges of the colony. The dominant male will defend the family's borders against rival prairie dogs, and disputes are resolved by fighting. Prairie dogs are also aggressive against predators such as badgers and snakes.

Prairie dogs are social animals, and often make social visits with each other, and greet each other with a sort of kiss. Prairie dogs employ a complex form of communication that involves barks and rhythmic chirps.

Prairie dog tunnel systems usually have several rooms. Tunnels can go down as far as 5 metres (16 ft), and can extend laterally as much as 30 metres (98 ft). Prairie dogs line their burrows with grass to insulate them, and the earth excavated from the burrow is piled up in mounds around the burrow's entrance. The prairie dogs use these carefully maintained mounds as observation posts.

The prairie dog is well adapted to predators. They can detect predators from a far distance and alert other prairie dogs to the danger with a special, high-pitched call. Prairie dogs use different calls to identify specific predators. Prairie dogs also trim the vegetation around their colonies, perhaps to remove any cover for predators. Their burrows generally contain several routes of escape.

The prairie dog is chiefly herbivorous, though it eats some insects. It feeds primarily on grasses and, in the fall, broadleaf plants. Prairie dogs have 1-6 pups (babies) yearly, which are born blind and furless and need about 30 days of close nurturing from their mother.

Sometimes two prairie dogs touch teeth with each other. Researchers think they do this as a way of recognizing each other.

Prairie dogs are hunted by many animals, including wolves, dogs, coyotes, bobcats, foxes, and humans.

All content from Kiddle encyclopedia articles (including the article images and facts) can be freely used under Attribution-ShareAlike license, unless stated otherwise. Cite this article:
Prairie dog Facts for Kids. Kiddle Encyclopedia.