The American badger (Taxidea taxus) is a North American badger, somewhat similar in appearance to the European badger, although not closely related. It is found in the western and central United States, northern Mexico, and south-central Canada to certain areas of southwestern British Columbia.

The American badger's habitat is typified by open grasslands with available prey (such as mice, squirrels, and groundhogs). The species prefers areas such as prairie regions with sandy loam soils where it can dig more easily for its prey. 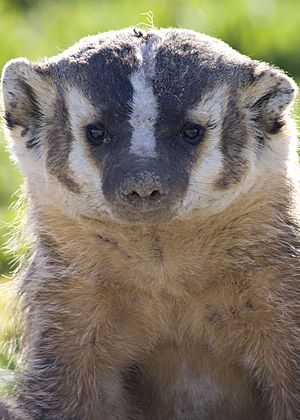 The American badger has most of the general characteristics common to badgers; with stocky and low-slung bodies with short, powerful legs, they are identifiable by their huge fore-claws (measuring up to 5 cm in length) and distinctive head markings. 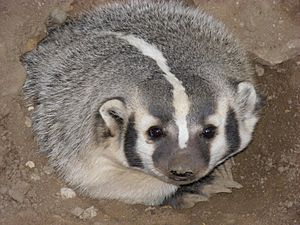 Except for the head, the American badger is covered with a grizzled, brown, black and white coat of coarse hair or fur, giving almost a mixed brown-tan appearance. The coat aids in camouflage in grassland habitat.

Its triangular face shows a distinctive black and white pattern, with brown or blackish "badges" marking the cheeks and a white stripe extending from the nose to the base of the head. 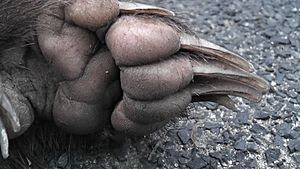 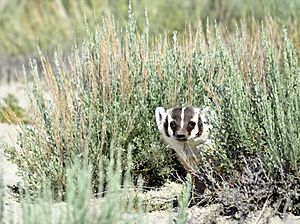 They also prey on ground-nesting birds, such as the bank swallow or sand martin and burrowing owl, and lizards, amphibians, carrion, fish, skunks and Spilogale), insects, including bees and honeycomb, and some plant foods such as corn, peas, green beans, mushrooms and other fungi, and sunflower seeds.

American badgers are generally nocturnal; however, in remote areas with no human intrusion they can be observed foraging during the day. Badgers do not hibernate but may become less active in winter. A badger may spend much of the winter in cycles of torpor that last around 29 hours. They do emerge from their burrows when the temperature is above freezing. 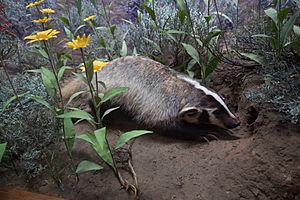 Badgers are normally solitary animals, but are thought to expand their territories in the breeding season to seek out mates. Mating occurs in late summer and early fall. Young are born from late March to early April in litters ranging from one to five young, averaging about three. Most female American badgers become pregnant for the first time after they are a year old. Males usually do not breed until their second year.

Badgers are born blind, furred, and helpless. Eyes open at four to six weeks. The female feeds her young solid foods prior to complete weaning, and for a few weeks thereafter. Young American badgers first emerge from the den on their own at five to six weeks old. Families usually break up and juveniles leave from the end of June to August.

Large predators occasionally kill American badgers. Their average lifetime in the wild is 9–10 years, with a record of 14; a captive example lived at least 15 years and five months. 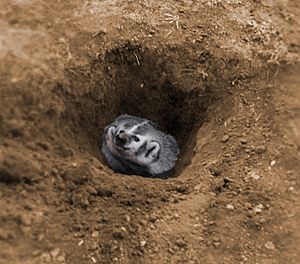 A badger emerging from its hole

American badgers prefer grasslands and open areas with grasslands, which can include park lands, farms, and treeless areas with a good supply of rodent prey. They may also be found in forest glades and meadows, marshes, brushy areas, hot deserts, and mountain meadows.

In Arizona, they occur in desert scrub and semi-desert grasslands. In California, American badgers are primarily able to survive through a combination of open grasslands of agricultural lands, protected land trust and open space lands, and even regional and state and national park lands with grassland habitat. 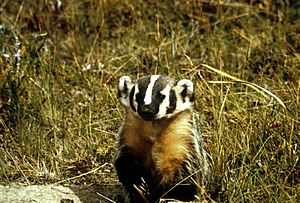 In Ontario it primarily resides on the extreme southwestern portion of the province, restricted to the north shore of Lake Erie in open areas generally associated with agriculture and along woodland edges.

American badgers require cover for sleep, concealment, protection and from weather. They typically enlarge foraged out gopher or other prey holes, or other animal burrows. Their dens range from about 4 feet to 10 feet in depth and 4 feet to 6 feet in width.

A female American Badger may create 2 to 4 burrows with a connecting tunnel for concealment and safety for her young. Soil from digging out the burrow appears in front of the burrow entrance, and a view from a distance reveals a mound-like roof of the burrow, with the living and concealment space created underneath the raised-roof appearing mound. 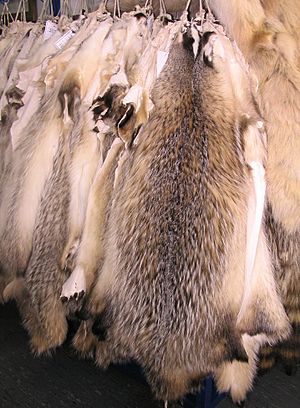 While the American badger is an aggressive animal with few natural enemies, it is still vulnerable to other species in its habitat.

Predation on smaller individuals by golden eagles, coyotes and bobcats have been reported. Bears and gray wolves occasionally kill American badgers, while cougars apparently are the main predators of adults, hunting them much more frequently than the other carnivorans.

American badgers are trapped by humans for their pelts. Their fur is used for shaving and painting brushes.

In May 2000, the Canadian Species at Risk Act listed both the Taxidea taxus jacksoni and the T. t. jeffersonii subspecies as an endangered species in Canada. The California Department of Fish and Game designated the American badger as a California species of special concern.

All content from Kiddle encyclopedia articles (including the article images and facts) can be freely used under Attribution-ShareAlike license, unless stated otherwise. Cite this article:
American badger Facts for Kids. Kiddle Encyclopedia.