The Groundhog is a rodent. It is also called a woodchuck. It belongs to the group of ground squirrels. Those squirrels are also known as marmots. The animal may also be called Woodchuck, or Whistlepig. Groundhogs dig tunnels and live underground. Groundhog holes, called burrows, are easy to recognize; they are holes, about 9.in (inches) (23 cm (centimeters)) wide which usually have large piles of dirt and rocks at the entrance. Every single hole, may have tunnels which lead to as many as ten other holes, the tunnels are very large and can have chambers, like rooms, in them. Groundhogs can make their homes under trees, around buildings and in open fields. 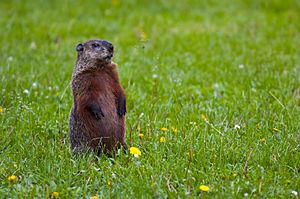 Motionless individual, alert to danger, will whistle when alarmed to warn other groundhogs

The time spent observing groundhogs by field biologists represents only a small fraction of time devoted to the field research. W.J. Schoonmaker reports that groundhogs may hide when they see, smell or hear the observer. Ken Armitage, marmot researcher, states that the social biology of the groundhog is well understudied. Despite their heavy-bodied appearance, groundhogs are accomplished swimmers and occasionally climb trees when escaping predators or when they want to survey their surroundings. They prefer to retreat to their burrows when threatened; if the burrow is invaded, the groundhog tenaciously defends itself with its two large incisors and front claws. Groundhogs are generally agonistic and territorial among their own species, and may skirmish to establish dominance. Outside their burrow, individuals are alert when not actively feeding. It is common to see one or more nearly-motionless individuals standing erect on their hind feet watching for danger. When alarmed, they use a high-pitched whistle to warn the rest of the colony, hence the name "whistle-pig". Groundhogs may squeal when fighting, seriously injured, or caught by a predator. Other sounds groundhogs may make are low barks and a sound produced by grinding their teeth. When groundhogs are frightened, the hairs of the tail stand straight up, giving the tail the appearance of a hair brush. David P. Barash wrote he witnessed only two occasions of upright play-fighting among woodchucks and that the upright posture of play-fighting involves sustained physical contact between individuals and may require a degree of social tolerance virtually unknown in M. monax. He said it was possible to conclude, alternatively, that upright play-fighting is part of the woodchuck's behavioral repertory but rarely shown because of physical spacing and/or low social tolerance. 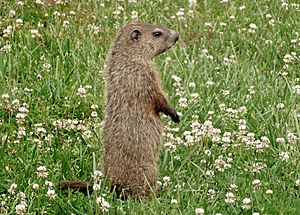 Clover is a preferred food source for groundhogs.

Mostly herbivorous, groundhogs eat primarily wild grasses and other vegetation, including berries and agricultural crops, when available. In early spring, dandelion and coltsfoot are important groundhog food items. Some additional foods include: sheep sorrel, timothy, buttercup, tear thumb, agrimony, red and black raspberries, buckwheat, plantain, wild lettuce, all varieties of clover, and alfalfa. Groundhogs also occasionally eat grubs, grasshoppers, insects, snails and other small animals, but are not as omnivorous as many other Sciuridae. Like squirrels, they also have been observed sitting up eating nuts such as shagbark hickory, but unlike squirrels, do not bury them for future use.

Groundhogs will occasionally eat snails, insects and baby birds they come upon by accident. An adult groundhog will eat more than a pound of vegetation daily. In early June, woodchucks' metabolism slows, food intake decreases, their weight increases by as much as 100% and fat deposits are produced upon which they will live during hibernation and late winter. Instead of storing food, groundhogs stuff themselves to survive the winter without eating. Thought not to drink water, groundhogs are reported to obtain needed liquids from the juices of food-plants, aided by their sprinkling with rain or dew.

Groundhogs are excellent burrowers, using burrows for sleeping, rearing young, and hibernating. W.J. Schoonmaker excavated 11 dens finding the earth removed from these averaged six cubic feet or four and eight-tenths bushels per den. The longest burrow was 24 feet plus 2 short side galleries. The amount of soil taken from this den was eight bushels and it weighed 640 pounds. The average weight of the earth taken from all eleven dens was 384 pounds. Though groundhogs are the most solitary of the marmots, several individuals may occupy the same burrow. Groundhog burrows usually have two to five entrances, providing groundhogs their primary means of escape from predators. Burrows are particularly large, with up to 14 metres (46 ft) of tunnels buried up to 1.5 metres (5 ft) underground, and can pose a serious threat to agricultural and residential development by damaging farm machinery and even undermining building foundations. In a June 7, 2009 Humane Society of the United States article, "How to Humanely Chuck a Woodchuck Out of Your Yard", John Griffin, director of Humane Wildlife Services, stated you would have to have a lot of woodchucks working over a lot of years to create tunnel systems that would pose any risk to a structure.

The burrow is used for safety, retreat in bad weather, hibernating, sleeping, love nest, and nursery. In addition to the nest, there is an excrement chamber. The nest chamber may be about twenty inches to three feet below ground surface. It is about sixteen inches wide and fourteen inches high. There are typically two burrow openings or holes. One is the main entrance, the other a spy hole. Description of the length of the burrow often includes the side galleries of the burrow. Excluding the side galleries, Schoonmaker reports the longest was twenty-four feet, with the average length of eleven dens dug out to be fourteen feet. W.H. Fisher investigated nine burrows, finding the deepest point to be forty-nine inches down. The longest, including side galleries, was forty-seven feet eleven and one half inches. Numbers of burrows per individual groundhog decreases with urbanization.

Bachman mentioned that when the young groundhogs are a few months old, they prepare for separation, digging a number of holes in the area of their early home. Some of these holes were only a few feet deep and never occupied but the numerous burrows gave the impression that groundhogs live in communities.

Groundhogs are one of the few species that enter into true hibernation, and often build a separate "winter burrow" for this purpose. This burrow is usually in a wooded or brushy area and is dug below the frost line and remains at a stable temperature well above freezing during the winter months. In most areas, groundhogs hibernate from October to March or April, but in more temperate areas, they may hibernate as little as three months. Groundhogs hibernate longer in northern latitudes than southern latitudes. To survive the winter, they are at their maximum weight shortly before entering hibernation. When the groundhog enters hibernation, there is a drop in body temperature to as low as 35 degrees fahrenheit, heart rate falls to 4-10 beats per minute and breathing rate falls to one breath every six minutes. During hibernation, they experience periods of torpor and arousal. They emerge from hibernation with some remaining body fat to live on until the warmer spring weather produces abundant plant materials for food. Males emerge from hibernation before females. Groundhogs are mostly diurnal, and are often active early in the morning or late afternoon. 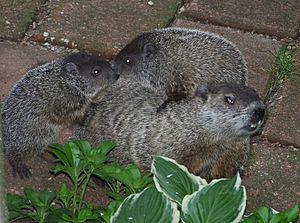 A groundhog mother and her cubs (kits) in a suburban yard

Usually groundhogs breed in their second year, but a small proportion may breed in their first. The breeding season extends from early March to mid- or late April, after hibernation. A mated pair remains in the same den throughout the 31- to 32-day gestation period. As birth of the young approaches in April or May, the male leaves the den. One litter is produced annually, usually containing two to six blind, hairless and helpless young. Groundhog mothers introduce their young to the wild once their fur is grown in and they can see. At this time, if at all, the father groundhog comes back to the family. They encourage their young to copy their behaviors and during this time may differ from usual routines. By the end of August, the family breaks up; or at least, the larger number scatter, to burrow on their own.

In the United States, there is a holiday called Groundhog Day. It is celebrated on February 2 of every year.

All content from Kiddle encyclopedia articles (including the article images and facts) can be freely used under Attribution-ShareAlike license, unless stated otherwise. Cite this article:
Groundhog Facts for Kids. Kiddle Encyclopedia.