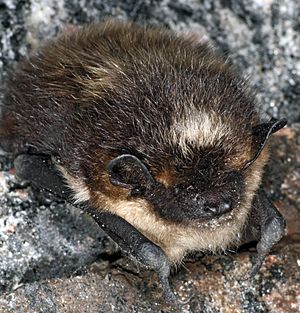 Hibernation is a time of inactivity. Some endothermic (warm-blooded) animals hibernate, usually during the winter, when food is short. They fall into a sleep-like state. They regulate their metabolism to consume less energy. They lower their body temperature, slow their breathing, and slow other vital functions. During hibernation, the body uses fat for energy, which the animal has gathered in summer and autumn.

While hibernation has long been studied in rodents, namely ground squirrels, no primate or tropical mammal was known to hibernate until the discovery that the fat-tailed dwarf lemur of Madagascar hibernates in tree holes for seven months of the year. Malagasy winter temperatures sometimes rise to over 30 °C (86 °F), so hibernation is not exclusively an adaptation to low ambient temperatures. The hibernation of this lemur is strongly dependent on the thermal behaviour of its tree hole: if the hole is poorly insulated, the lemur's body temperature fluctuates widely, passively following the ambient temperature; if well insulated, the body temperature stays fairly constant and the animal undergoes regular spells of arousal. Dausmann found that hypometabolism in hibernating animals is not necessarily coupled to a low body temperature.

Hibernating bears are able to recycle their proteins and urine, allowing them both to stop urinating for months and to avoid muscle atrophy. 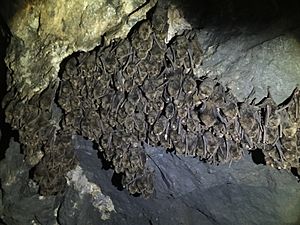 Bats hibernating in a silver mine

Obligate hibernators are animals that spontaneously, and annually, enter hibernation regardless of ambient temperature and access to food. Obligate hibernators include many species of ground squirrels, other rodents, mouse lemurs, the European hedgehog and other insectivores, monotremes, marsupials, and even butterflies such as the small tortoiseshell. These undergo what has been traditionally called "hibernation": the physiological state where the body temperature drops to near ambient (environmental) temperature, and heart and respiration rates slow drastically. The typical winter season for these hibernators is characterized by periods of torpor interrupted by periodic, euthermic arousals, wherein body temperatures and heart rates are restored to euthermic (more typical) levels. The cause and purpose of these arousals is still not clear.

The question of why hibernators may experience the periodic arousals (returns to high body temperature) has plagued researchers for decades, and while there is still no clear-cut explanation, there are myriad hypotheses on the topic. One favored hypothesis is that hibernators build a 'sleep debt' during hibernation, and so must occasionally warm up in order to sleep. This has been supported by evidence in the Arctic ground squirrel. Another theory states that the brief periods of high body temperature during hibernation are used by the animal to restore its available energy sources. Yet another theory states that the frequent returns to high body temperature allow mammals to initiate an immune response.

Historically there was a question of whether or not bears truly hibernate, since they experience only a modest decline in body temperature (3–5 °C) compared with what other hibernators undergo (32 °C or more). Many researchers thought that their deep sleep was not comparable with true, deep hibernation. This theory has been refuted by recent research in captive black bears. 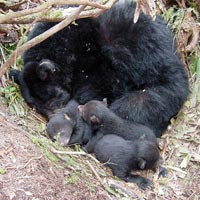 Historically, Pliny the Elder believed swallows hibernated, and ornithologist Gilbert White documented anecdotal evidence in his 1789 book The Natural History of Selborne that indicated the belief was still current in his time. Birds typically do not hibernate, instead utilizing torpor. One known exception is the common poorwill (Phalaenoptilus nuttallii), first documented by Edmund Jaeger.

Fish are ectothermic, and so, by definition, cannot hibernate because they cannot actively down-regulate their body temperature or their metabolic rate. However, they can experience decreased metabolic rates associated with colder environments and/or low oxygen availability (hypoxia) and can experience dormancy. For a couple of generations during the 20th century it was thought that basking sharks settled to the floor of the North Sea and became dormant. Research by Dr David Sims in 2003 dispelled this hypothesis, showing that the sharks actively traveled huge distances throughout the seasons, tracking the areas with the highest quantity of plankton. Epaulette sharks have been documented to be able to survive for long periods of time without oxygen and at temperatures of up to 26 °C (79 °F), as a means to survive in their shoreline habitat, where water and oxygen levels vary with the tide. Other animals able to survive long periods with no or very little oxygen include the goldfish, the red-eared slider turtle, the wood frog, and the bar-headed goose. However, the ability to survive hypoxic or anoxic conditions is not the same, nor closely related, to endotherm hibernation.

All content from Kiddle encyclopedia articles (including the article images and facts) can be freely used under Attribution-ShareAlike license, unless stated otherwise. Cite this article:
Hibernation Facts for Kids. Kiddle Encyclopedia.