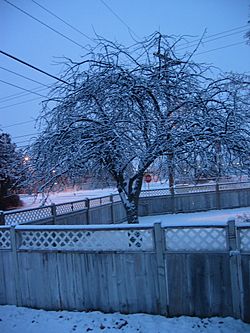 During winter dormancy, plant metabolism virtually comes to a standstill due, in part, to temperatures that slow chemical activity.

Dormancy is a period in an organism's life cycle when growth, development, and (in animals) physical activity are temporarily stopped. This minimizes metabolic activity and therefore helps an organism to conserve energy. Dormancy tends to be closely associated with environmental conditions. Organisms can synchronize entry to a dormant phase with their environment through predictive or consequential means.

Consequential dormancy occurs when organisms enter a dormant phase after adverse conditions arise. This is often found in areas with an unpredictable climate. Sudden changes in conditions may lead to a high mortality rate among animals relying on consequential dormancy. On the other hand, its use can be advantageous, as organisms remain active longer and are able to make greater use of available resources.

Development from the seed

A seed, though not active, is a tiny living thing. It contains the embryo of the future plant, which is not changing or developing: it is dormant. The common idea is that the seed "sleeps" until it gets what it needs to wake up. That is not correct. Different seeds have different habits, no doubt adapted to their habitat. There are different kinds of resting stages in seeds:

1. Seed dormancy: means the seed does not develop for a while even when conditions are suitable.p98 Delayed germination (development) allows time for dispersal. Changes take place inside the seed which sooner or later make it germinate. The details vary hugely between species.
2. Seed hibernation: fails to germinate because conditions are not right. Growth is triggered by particular events in the environment. Details of the triggers are known for some, but not all, seeds. Rain, fire, ground temperature, are examples. Many seeds only germinate after they have been eaten and passed through the digestive system of an animal. This also is a dispersal method.

When a seed germinates ("wakes up"), it begins to grow into a little plant called a seedling. It uses the soft fleshy material inside the seed for nutrients (food) until it is ready to make food on its own using sunlight, water and air.

Most seeds germinate underground where there is no sunlight. The plant does not need the nutrients in soil for a few days or weeks, because the seed has all the things it needs to grow. Later, though, it will begin to need sunlight. If there is sunlight, the plant will use it to grow healthy. If there is no light, the plant will still grow for a while, but its plastids will not mature: the chlorophyll does not turn green. If the plant does not get enough light, it will eventually die. It needs light to make food for itself when the reserve in the seed runs out.

All content from Kiddle encyclopedia articles (including the article images and facts) can be freely used under Attribution-ShareAlike license, unless stated otherwise. Cite this article:
Dormancy Facts for Kids. Kiddle Encyclopedia.