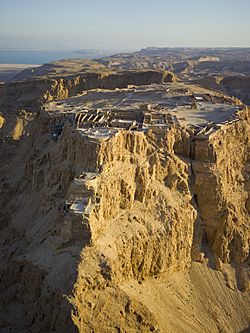 an aerial view of masada

Masada is an ancient fortification in the Southern District of Israel. It is on top of an isolated rock plateau, like a mesa. The rock is on the east of the Judaean Desert, and overlooks the Dead Sea.

Herod the Great fortified Masada between 37 and 31 BC, and built palaces for himself on the mountain.

According to Josephus, the Sicarii, a splinter group of the Hebrew Zealots, held out against a Roman legion here. This was the Siege of Masada at the end of the First Jewish–Roman War. The seige ended in the mass suicide of 960 people – the rebels and their families.

The hill is 63 meters above the sea level and 450 above the dead sea level near Mount Elazar.

All content from Kiddle encyclopedia articles (including the article images and facts) can be freely used under Attribution-ShareAlike license, unless stated otherwise. Cite this article:
Masada Facts for Kids. Kiddle Encyclopedia.