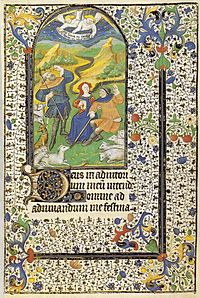 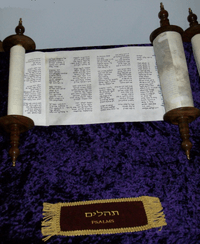 Scroll of the Psalms

Psalms (Hebrew: תְהִלִּים, Tehillim, or "praises") is a book of 150 Hebrew poems in the Bible. The Book of Psalms is the first Ketuvim and part of the Hebrew Bible or Tanakh, and it is also in the Old Testament of the Christian translations. People traditionally believe that many of the Psalms in the Bible were written by King David to God. Perhaps the most famous one is Psalm 23, which starts "The LORD is my shepherd". Psalm 23 is often used for funerals.

There are 150 Psalms in the Biblical canon of Jews, Protestants, and Catholics, but there are also more poems that these religions do not think are holy. Psalm 151 is part of canon of the Eastern Orthodox Church.

The names "Psalms" and "Psalter" come from the Septuagint (the Greek translation of the Old Testament). There, they were about stringed instruments (for example, the harp, lyre and lute), then to songs sung with them. The traditional Hebrew title is tehillim. Tehillim means "praises", though many of the psalms are tephillot ("prayers"). One of the first collections in the book was titled "the prayers of David son of Jesse" (72:20, NIV).

The Psalter is poetry, though it has many prayers and not all Old Testament prayers were poetic. In fact, not all praise was poetic either. The Psalms are full of images, comparisons and metaphor. The Hebrew text often plays with words and repeats the same words, adding synonyms (words with the same meaning) to fill out the description. Important words show the main themes in the prayer or song.

All content from Kiddle encyclopedia articles (including the article images and facts) can be freely used under Attribution-ShareAlike license, unless stated otherwise. Cite this article:
Psalms Facts for Kids. Kiddle Encyclopedia.