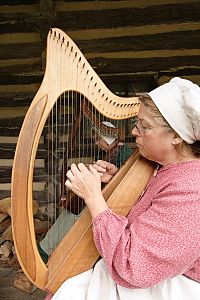 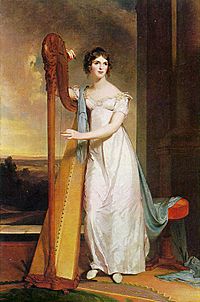 The harp is a musical instrument. It is the second biggest string instrument in an orchestra. It dates back to 4000 BC when the Egyptians used them in holy places. Christian artists often draw angels playing harps in Heaven.

Harp is a string instrument. Each string is tight, so it makes the right sound or note for that string. The strings are tied to the frame.

The frame is usually a wood triangle. It must be strong, so that the many tight strings do not break it.

The side of the triangle that leans on the player's body, is the sound-box. Empty boxes can make sounds louder.

The last side of the triangle is called the pillar. The oldest harps from Egypt did not have pillars. If the strings were too tight, they would break the harp. Adding a pillar to a harp frame makes the frame very strong, so that the strings will not break it.

Harp players pluck the strings with their fingers. This makes the strings move so that the strings make sounds. Each string sound is a different musical note. Harp players play songs by plucking the strings in the right order and at the right time. More than one string can be plucked at the same time. When the harp player wants a note to stop, they touch that string softly, so that it stops moving. 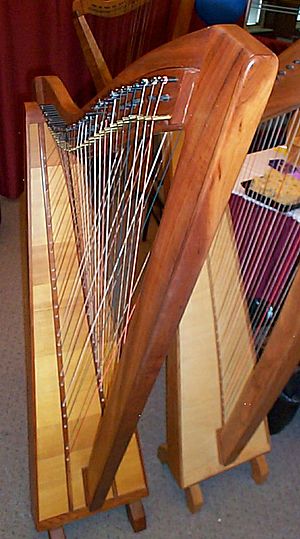 There are many different kinds of harps. The two main kinds are folk harps and pedal harps.

Folk harps can be found in many different sizes. The smallest ones can be less than half a meter tall. The biggest ones can be almost 1.5 meters tall, and have a foot so they can stand on the ground by themselves. They can be too big to be lifted by one person.

The number of strings varies on folk harps from less than 20 to more than 40.

Most non-pedal harps have levers. They are most often tuned to E flat major or C major, and comes with levers to raise the note.

Pedal harps were invented during the 1800's CE, by a man in France. This is the kind of harp that is used in a Symphony Orchestra. Pedal harps are about two meters tall and have 47 strings. The lowest and highest notes on a pedal harp are the same as the lowest and highest notes on a piano. They are very heavy, and need more than one person to move them. The frame is usually made out of metal.

Things that are not harps

Some instruments have the word harp in their name, but they are not really harps. The harp is such an old musical instrument, that people sometimes say harp when they mean any kind of instrument.

All content from Kiddle encyclopedia articles (including the article images and facts) can be freely used under Attribution-ShareAlike license, unless stated otherwise. Cite this article:
Harp Facts for Kids. Kiddle Encyclopedia.