Pythagorean diatonic scale on C . A plus sign (+) indicates the syntonic comma. 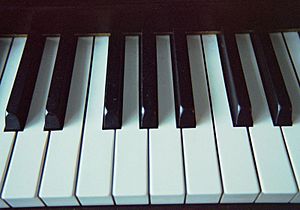 The modern piano keyboard is based on the interval patterns of the diatonic scale. Any sequence of seven successive white keys plays a diatonic scale.

The diatonic scale is one of the scales used in music. It is also called heptatonic scale, because it uses seven distinct pitch classes or tones. For each octave there are five whole steps and two half steps. The two half steps are separated by two or three whole steps. The word "diatonic" comes from the Greek διατονικός, meaning progressing through tones.

The seven pitches of any diatonic scale can be obtained using a chain of six perfect fifths. An example of this would be the seven natural pitches which form the C-major scale. It can be constructed from a stack of perfect fifths starting from F:

This property of the diatonic scale is called Pythagorean tuning. It was historically relevant and contributed to the worldwide diffusion of diatonic scales, because it allowed musicians to tune musical instruments easily by ear.

The term diatonic originally referred to the diatonic genus, one of the three genera of the ancient Greeks. In musical set theory, Allen Forte classifies diatonic scales as set form 7–35.

The following scales are diatonic:

Examples of scales that are not diatonic are whole-tone scales, as well as the gypsy scales, which are often used for folk music.

All content from Kiddle encyclopedia articles (including the article images and facts) can be freely used under Attribution-ShareAlike license, unless stated otherwise. Cite this article:
Diatonic scale Facts for Kids. Kiddle Encyclopedia.