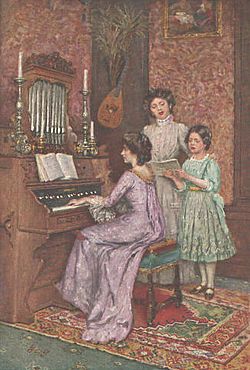 Church music is music that is intended to be part of Christian worship in churches, chapels, cathedrals or anywhere Christians meet to worship. Church music is sacred (religious) music, but not all religious music is church music. Some music may be inspired by religion, but it may not be church music. For example, some songs are about religion, but they may not be church music. Although it uses the words of the Requiem mass, Verdi’s Requiem, was composed for performance in a concert hall. Britten’s War Requiem was written for performance in a cathedral, but it was not meant to be part of a service of worship, so it would not usually be thought of as “church music”.

Church music has varied enormously during the history of Christianity as different churches kept changing their ideas about what part music should have in religious worship. Most church music is based on singing. Music written for church choirs mostly used the words of the liturgy (the words used in services). The organ is the most important musical instrument in church music, although from time to time many other instruments have been used as well.

During many periods in history composers writing for the church used traditional music rather than the newest fashions. This was particularly the case in the early 17th century when composers such as Claudio Monteverdi often wrote in two different styles: the old style for church music (which, at the time, they called “stilo antico”) and the new style for secular (non-religious) music (which they called “stilo moderno”).

Music in the early history of the church

During the early history of Christian worship the churches were spread through many countries in the Roman Empire. The musical traditions that already existed in these countries were used, so there was great variety. Musical instruments were associated with the devil and with dancing, and so they were thought to be wicked and were not allowed in churches. The only music that was allowed in churches was singing. In the 4th century Bishop Ambrosius of Milan introduced the antiphon and encouraged newly composed hymns. Psalms were an important part of the early Christian worship. Responsorial psalms were psalms which were sung by one person (who may have been called a “reader”), and the congregation may have responded at the end of a verse with something simple such as “Alleluia”. Gradually “antiphonal psalmody” was developed. This meant that the choir stands on opposite sides facing one another and they sing the verses of the psalm alternately (first one side has a turn, then the other). Antiphonal psalm singing can still be heard today in Anglican cathedrals.

The kind of music heard in the Catholic Church was known as chant or plainchant, often known as “Gregorian chant” (after St Gregory the Great, who was Pope from 590-604). The text (the words that were sung) were the standard words of the liturgy. The words of the Mass were set to music by many composers. Music for the dead was called Requiem Mass. There was also music for Vespers and the Compline. Until the 16th century the organ was only used to accompany the singing. In the Renaissance period many great composers such as Giovanni da Palestrina and Orlande de Lassus wrote polyphonic music for the Catholic Church. They often wrote motets: short pieces based on texts which were not part of the liturgy.

During the period called Reformation some Protestant groups broke away from the Catholic Church. From this time on Catholic and Protestant music developed in different ways.

Martin Luther started the Protestant movement in Germany. In the Lutheran church the chorale was the most important part of the musical worship. Luther himself composed many chorale tunes. These are like hymns. The great Johann Sebastian Bach based much of his organ music on the chorale (these pieces are called Chorale Preludes). The choir often sang a motet. Sometimes these choir pieces became very long and turned into cantatas. The words were not from the liturgy but made up by poets or taken from the Bible. Bach wrote about 200 cantatas for the church. He also wrote two great passions which tell the story of Jesus dying on the cross. Other composers who have contributed to Protestant church music in Europe include Heinrich Schütz, Jan Pieterszoon Sweelinck, Dietrich Buxtehude, Johann Pachelbel, and Felix Mendelssohn-Bartholdy.

Music for the Catholic Church includes instrumental music such as “church cantatas”. Arcangelo Corelli and Wolfgang Amadeus Mozart wrote many examples of these. Mozart also wrote several masses. Great Italian composers of the 16th and 17th centuries who wrote church music include Giovanni Gabrieli and Claudio Monteverdi. In the 19th century Rheinberger and Max Reger wrote music in the Romantic style. French composers of this time wrote in a style which was similar to secular music.

When King Henry VIII broke away from the Catholic Church he founded his own church, known as the Anglican church. Many great composers wrote music for the Anglican service. Their music for choirs was mostly service settings and anthems. They also wrote many hymn tunes. Important composers include William Byrd (who also wrote Catholic church music) and Thomas Tallis in the Renaissance, Orlando Gibbons and Henry Purcell in the Baroque period, and in later periods Samuel Sebastian Wesley, Charles Stanford, Ralph Vaughan Williams, Edward Bairstow, William Mathias and John Rutter.

Church Music in the United States

Church music in American churches developed, at first, in a similar way to European music. The Book of Common Prayer was the basis of American worship. Both Puritans and Baptists thought that congregational singing was important. In the 18th century Singing Masters from Singing Schools in the north eastern states used to travel around to try to teach people in church to sing properly. The most famous of these singing masters was William Billings. Because most people could not read, a system called Lined-out Hymnody developed, in which the priest sang a line and the congregation copied him. Later in the century, during the “First Great Awakening”, the hymn tunes of English composers such as Isaac Watts and Charles Wesley became popular.

In the 19th century people from different churches met at Camp Meetings. These were led by Evangelists. The songs reflect the belief that sinners can be saved by repenting. The music of black people and of folk music became important influences. Songs became tuneful and often had refrains. In the middle of the century Sunday Schools for children became extremely popular and many songs were written for them. Gospel songs and negro spirituals also became very widely used and influenced the development of church music in America.

Church Music in the Orthodox Church

Church music in the Orthodox Church in East European countries is always sung. It is based on the Byzantine musical tradition.

All content from Kiddle encyclopedia articles (including the article images and facts) can be freely used under Attribution-ShareAlike license, unless stated otherwise. Cite this article:
Church music Facts for Kids. Kiddle Encyclopedia.