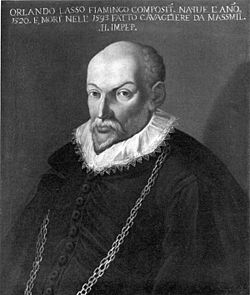 Orlande de Lassus (whose name is also spelt Orlandus Lassus, Orlando di Lasso, Roland de Lassus, or Roland Delattre) (born Mons, Hainaut, probably in 1532 ; died Munich, 14 June, 1594) was a Franco-Flemish composer who lived in the last part of the Renaissance. Lassus and Palestrina are the two most famous composers of that time who were writing church music in a polyphonic style. 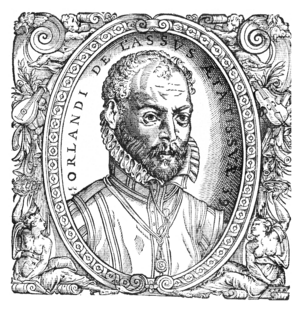 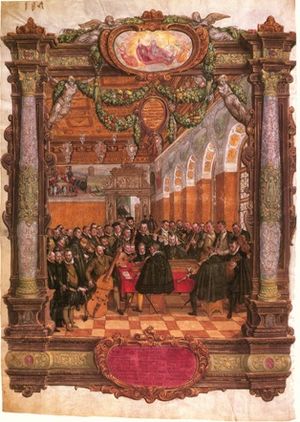 He was born in Mons in the province of Hainaut in the Low Countries which is mostly what is today the south part of the Netherlands and Belgium. We know very little about his childhood. There is a story that, when he was a choirboy, he was abducted three times by another church who wanted him to sing in their choir because he had a beautiful voice. There is no proof that this story is true.. At the age of twelve he left his country and went to Mantua, Sicily, and later to Milan in Italy and then to Naples where he worked until the early 1550s. Next he moved to Rome, where he worked for the Grand Duke of Tuscany, who had a large household there. In 1553, he became maestro di cappella of the Basilica di San Giovanni in Laterano in Rome. This was an excellent job for a man who was only 21 years old. However, he only stayed there a year. Later, in 1555, Palestrina took that job. Lassus left Rome to go home to the Low Countries to see his parents who were ill, but by the time he got home they were both dead.

We are not sure what he did between then and 1554. He may have gone to France and England. In 1555 he returned to the Low Countries and had some of his first works published in Antwerp. In 1556 he joined the court of Duke Albert V of Bavaria who was very keen on music and was trying to make music in his country as good as the music in Italy. Lassus was one of several Netherlanders to work there, and by far the most famous. He seems to have been happy in Munich and he stayed there. In 1558 he married the daughter of a maid of honour of the Duchess; they had two sons who both became composers. By 1563 Lassus had been made maestro di cappella. He stayed there for the rest of his life, although several other kings and aristocrats offered him jobs in other places. He had many honours, including being knighted by the Pope.

In 1590 his health started to be bad. In 1594 his employer decided it was costing him too much to employ Lassus, so he wrote a letter to him to say that he was dismissed (that he no longer had a job). Lassus never saw the letter, because that very same day he died. 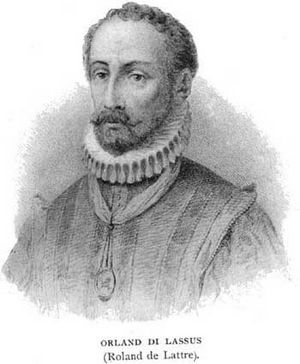 Lassus composed a lot of church music. He had to compose masses for the morning and evening services. Many of these are parody masses, which means they were based on tunes from other compositions. Others were influenced by composers from Venice.

He wrote many motets which were probably sung at services as well. In some of these motets he shows a sense of humour. For example, one of his motets makes fun about bad singers: the music stops and starts and stutters. It was a kind of musical joke. Sometimes he had to write music for special occasions. He had visited Italy several times and learned the Italian way of writing polyphonic music.

Lassus also wrote many songs in French (chansons) as well as German (Lieder). He also wrote madrigals. He even wrote drinking songs.

He never wrote anything that was strictly instrumental music.

All content from Kiddle encyclopedia articles (including the article images and facts) can be freely used under Attribution-ShareAlike license, unless stated otherwise. Cite this article:
Orlande de Lassus Facts for Kids. Kiddle Encyclopedia.