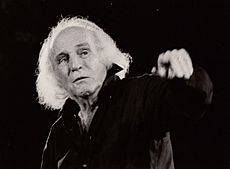 Chanson is the French word for "song". The word is often used in music to mean any song with French words, but it is more often used when talking about songs in which lyrics have been set to music by French classical composers.

Very often "chansons" refers to the French songs that were sung in the late Middle Ages and Renaissance. People who sang these chansons were called "chansonniers". They had various forms, including ballade, rondeau and virelai. Some composers at the time liked to set popular poetry to music. The earliest chansons were for two, three or four voices, many of them being for three voices. By the 16th century most were for four voices. Sometimes, the singers were accompanied by instruments.

The first important composer of chansons was the medieval composer Guillaume de Machaut. In the Renaissance Guillaume Dufay and Gilles Binchois wrote many simple chansons. Later Johannes Ockeghem and Josquin des Prez composed chansons which had lots of imitation between the voices. Clément Janequin wrote more simple, homophonic chansons. He worked in the area around Paris. Later composers such as Orlando de Lassus were influenced by the Italian madrigal. The style of music started to be used in music for instruments.

The first book of sheet music printed from movable type was Harmonice Musices Odhecaton, a collection of 96 chansons by many composers, published in Venice in 1501.

During the 16th century French songs started to be composed with lute or keyboard accompaniment. In the 19th century many composers wrote songs with piano accompaniment. These chansons were often called mélodies.

In France today "chanson" often refers to the work of more popular singers such as Georges Brassens, Jacques Brel, Édith Piaf, Camille, Olivia Ruiz. French chansons of Jacques Brel have been translated and are interpreted in English by Arnold Johnston, Professor at West Michigan University. More than 100 chansons of Brel, Brassens, Barbara, Bécaud, Ferrat, Aznavour, Trenet et Ferré have been translated and are interpreted in German language by the Duo Stéphane & Didier (see www.deutsche-chanson-texte.de).

All content from Kiddle encyclopedia articles (including the article images and facts) can be freely used under Attribution-ShareAlike license, unless stated otherwise. Cite this article:
Chanson Facts for Kids. Kiddle Encyclopedia.