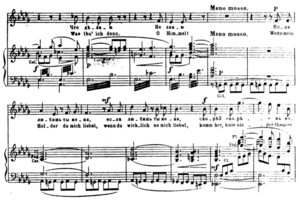 A page from a piano-vocal score (from the opera William Ratcliff, by César Cui). 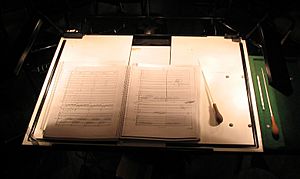 A score is printed music of a piece written for several instruments. The music (parts) for each instrument are written above one another on separate staves. A conductor can see from the score what each instrument should be playing and how it fits together. Each player only has his or her own part (the notes that that performer plays) in front of him/her. From time to time, if the instrument has long period where he/she does not play (that is, has a block of rests), the publisher may print, usually in smaller type, a portion of the music another instruments (usually an instrument playing the melody) would be playing to help the performer know what to listen before he/she starts playing. These smaller notes are called cues because it cues, or clues, the performer that he/she is going to start playing soon.)

In an orchestral score, the order in which the instrumental lines are usually printed is:

If there is a choir or solo singers their part is written near the bottom, above the cello stave. The bar lines will usually join up the staves of each family. This makes it easier to find the instruments than if they had been drawn all the way down the page. An experienced conductor knows score order so well that they can examine a score and very quickly see which instrument plays a given part, even if the instrument names are not there.

All content from Kiddle encyclopedia articles (including the article images and facts) can be freely used under Attribution-ShareAlike license, unless stated otherwise. Cite this article:
Sheet music Facts for Kids. Kiddle Encyclopedia.