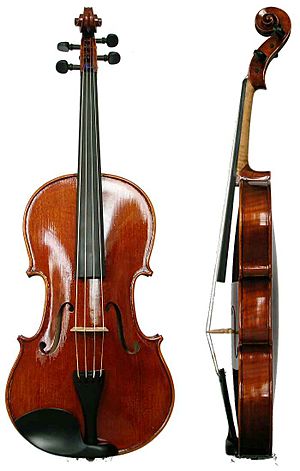 A viola ( vee-OH-lə) is a musical instrument which is similar to the violin and cello. The viola sounds lower than a violin, but higher than a cello. It has four strings, called the C, G, D, and A strings. The highest string is the A. The viola is played with a bow in the right hand. Playing with the bow is called arco. Sometimes the strings may be plucked (pizzicato).

The person that makes and repairs violas is called a luthier.The Viola is also known as the Cinderella of the orchestra, due to it being unfairly neglected when it comes to popularity to the public and choice of famous classical music. Lionel Tertis and William Primrose were the two famous violist that helped the viola gain popularity and right to be a solo instrument.

People who write music often use the viola for harmony notes. It is one of the main instruments in a string quartet, along with two violins and a cello. The viola is found in chamber ensembles of string instruments only, and also in full symphony orchestras where strings, woodwinds, brass, and percussion instruments play together. The viola can also be a solo instrument, but is mostly used in an orchestra. The viola comes in many sizes. The sizes are measured in inches, such as a 14-inch viola. The size of the viola is measured from the bottom to the neck of it (its body's length).

All content from Kiddle encyclopedia articles (including the article images and facts) can be freely used under Attribution-ShareAlike license, unless stated otherwise. Cite this article:
Viola Facts for Kids. Kiddle Encyclopedia.