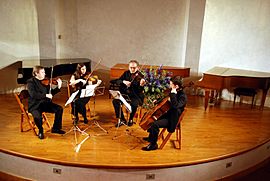 A string quartet in performance. From left to right - violin 1, violin 2, viola, cello

The four instruments in a string quartet are almost always 2 violins, 1 viola and 1 cello. The reason that a double bass is not used is that it would sound too loud and heavy. The balance between 2 violins, viola and cello is perfect. String quartets are the most popular form of chamber music. Many composers have written string quartets.

String quartet writing started in the 18th century. Italian composers like Sammartini (1698-1775) wrote music for two violins, viola and continuo. The continuo was either just a harpsichord or harpsichord with cello. Gradually composers started to leave the harpsichord out. The cello often played the same as the viola but one octave lower.

Composers of the Classical music period started writing cello parts which had a life of their own. Joseph Haydn (1732-1809) wrote many string quartets, making it a very popular form. His quartets from op.33 were, he said, “written in a new and special way”. All four parts were very clear and individual. There were always four movements: a fast movement, a slow one, a Minuet and Trio and a fast Finale. Haydn often played in a quartet with Wolfgang Amadeus Mozart (1756-1791) and two other players. Mozart also wrote lots of string quartets and dedicated some of them to Haydn. Three of Mozart’s later ones were written for the King of Prussia who played the cello well, so Mozart gave the cello lots of difficult music to play.

By the time Ludwig van Beethoven (1770-1827) was growing up string quartets treated each of the four instruments as important. Beethoven wrote 16 string quartets. The middle ones became particularly famous and later composers took ideas from them, for example the slow introductions, and the idea of having a fast scherzo instead of a minuet and trio for one of the middle movements. Beethoven’s last quartets are very beautiful, but also very complicated and sometimes quite aggressive. Beethoven was becoming very frustrated because he was deaf and could not hear his own music, but he could imagine it all in his head. Franz Schubert (1797-1827) admired them and wrote several string quartets himself.

In the 20th century composers have continued to write string quartets. Claude Debussy (1862-1918) and Maurice Ravel (1875-1934) each wrote one. Arnold Schoenberg even added a voice to his first String Quartet. Béla Bartók (1881-1945) wrote six string quartets which are very hard to play. They have very exciting rhythms which often come from his native Hungarian folk music, as well as complicated harmonies. Dmitri Shostakovich (1906-1975) wrote fifteen and Benjamin Britten (1913-1976) wrote three.

Playing in a string quartet is great fun. There are lots of great works by famous composers, as well as some music which has been written for young players who are learning.

There are professional players who form string quartets and who play together for many years. In the early part of the 20th century the Rosé Quartet was thought to be the best in Europe. Later the Amadeus Quartet became very famous.

All content from Kiddle encyclopedia articles (including the article images and facts) can be freely used under Attribution-ShareAlike license, unless stated otherwise. Cite this article:
String quartet Facts for Kids. Kiddle Encyclopedia.