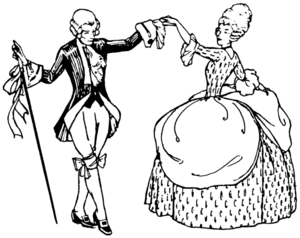 Minuet in the Classical Period.

A minuet is a dance which was popular in the 18th and 19th centuries in France. It was danced by the aristocracy, especially at the court of King Louis XIV.

Sometimes the French spelling menuet is used, or the Italian minuetto. It was a moderate or slow dance. There were always three beats in a bar (3/4 time).

Composers liked the music of the minuet and often wrote them just as pieces of music for a keyboard or other instruments. Composers like Bach and Handel included them in their suites (collection of dance movements). Lully started to put them in his operas, often in pairs: Minuet I, Minuet II, then Minuet I repeated. Often the second minuet would be played by three instruments, so it was called a trio.

In the Classical music period the minuet and trio were used in symphonies and sonatas. They usually formed the third movement of a four movement work. Haydn, Mozart and Beethoven all wrote minuets and trios. Gradually the minuets became faster so that they were called scherzos. By the 19th century the waltz had become fashionable among the new middle class. The polite minuet went out of fashion.

All content from Kiddle encyclopedia articles (including the article images and facts) can be freely used under Attribution-ShareAlike license, unless stated otherwise. Cite this article:
Minuet Facts for Kids. Kiddle Encyclopedia.