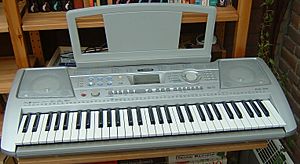 A keyboard instrument is an instrument that is played by pressing the keys of a keyboard. In a keyboard, the notes are arranged with naturals (usually white notes) forming the main body of the keyboard, and sharps and flats (usually black notes) placed in cuttings into the upper half of the naturals.

The ways in which the sound is made varies a lot:

In the 17th and 18th centuries, the word Clavier was used in Germany to mean any kind of keyboard instrument. Often, the naturals were black and the sharps and flats were white (see picture of harpsichord), but the layout was exactly the same. 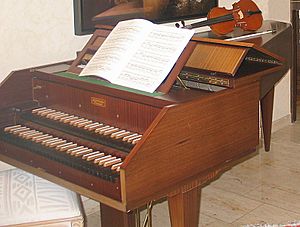 A modern harpsichord with two manuals (keyboards). It is a copy of a Baroque instrument

The development of electronic instruments in the 20th century has brought about many different types of electronic keyboard instruments. These include the ondes Martenot and the synthesizer.

Nowadays, people often talk about a keyboard meaning an electronic keyboard (e.g. “He plays the keyboard”). The plural form of the word is "keyboards".

Yamaha have now made the most successful keyboards, selling over 770,000 a year.

All content from Kiddle encyclopedia articles (including the article images and facts) can be freely used under Attribution-ShareAlike license, unless stated otherwise. Cite this article:
Keyboard instrument Facts for Kids. Kiddle Encyclopedia.