The Hammond organ is a keyboard instrument that looks like a piano. The most common Hammond organs create sound using metal wheels and electricity. It is an electric version of a pipe organ that was invented by Laurens Hammond and John M. Hanert. It was first built in 1935. Sliding "drawbars" adjust the type of sound that the organ makes. The Hammond organ is one of the most successful organs made because almost two million Hammond organs were sold. 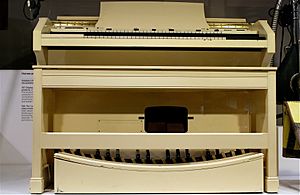 The Concert Model E was designed for the church and features a full 32-note pedalboard.

The most common Hammond organ has two keyboards that are called manuals by organ players. They are smaller versions of piano keyboards that are stacked on top of each other. This allows the organist to play both at the same time. The keys on the manuals of a Hammond organ are lighter and easier to press than the keys on a piano. This makes it easier for organists to play notes faster.

The pedalboard on a Hammond organ looks like a very large piano keyboard. It's played with your feet and makes very low sounding notes, known as bass notes.

Both manuals and the pedalboard can be played at the same time, making it easy to make complex sounds with the organ.

The sounds that the manuals and pedalboard make are controlled by switches called drawbars. You can pull them out to make the sound louder, or push them in to make the sound softer. Each manual has nine drawbars that control different parts of the sound. The drawbars on the left side control lower sounds while the drawbars on the right side control higher sounds. The pedalboard has two drawbars, and they both control low sounds.

Hammond organs have a feature called "percussion" which allows you to add melodic clicks to the music you're playing. It's controlled by switches on the upper left side of the organ. Percussion adds harmonics to the melodies you're playing.

To further change the sound of the organ, a knob exists that adds vibrato or chorus to the music depending on how it's turned. Vibrato is a very small change in pitch that makes the notes sound like they're "wobbly". Chorus adds additional notes to the notes you're playing to make the sound more "full".

The Hammond organ was based off of an early instrument called the Telharmonium which made sounds the same way the Hammond organ did, with turning metal discs. Laurens Hammond, the inventor, had a clock making business where he created a clock motor that is useful for other things too. With his motor he made the Hammond Organ. 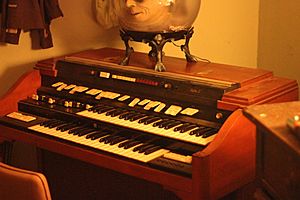 The most common Hammond organs are tonewheel organs, which means that they create sound based off of turning metal disks with bumps on the edges. An electric signal is sent over the bumps and the resulting signal is made louder by using an amplifier. Hammond's A, B, C, D, and RT series organs use tonewheels, and according to experts, they are preferred over any other model of Hammond.

Hammond manufactured tonewheel organs from 1935 to 1975.

Hammond manufactured transistor organs from 1975 to 1985 when the Hammond Organ Company went out of business. 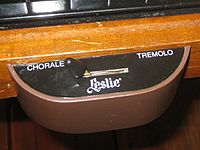 A "half-moon"-shaped switch for changing the speed of a Leslie speaker.

The tone generator in a Hammond organ is made up of many tonewheels spinning at the same speed. Electric signals and amplifiers make the sounds louder.

The most common speaker used with the Hammond organ is called a Leslie speaker. Made by Don Leslie, it copies the sound of a pipe organ by rotating the speakers inside the speaker cabinet. Leslie speakers were not made by Hammond, but most people liked them so much that they would buy them anyway.

An alternative to the Leslie Speaker is the Hammond Tone Cabinet, but that wasn't as popular.

All content from Kiddle encyclopedia articles (including the article images and facts) can be freely used under Attribution-ShareAlike license, unless stated otherwise. Cite this article:
Hammond organ Facts for Kids. Kiddle Encyclopedia.