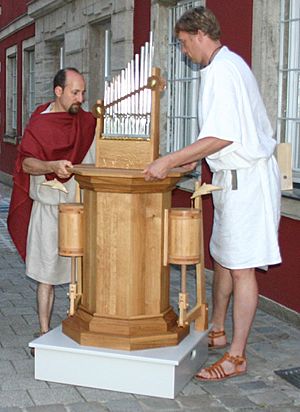 The water organ (or hydraulis).

The water organ or hydraulic organ is a kind of pipe organ. As in the pipe organ, the sound is made by air blowing through the pipes, but power to make the air blow does not come from bellows or from electricity as in the modern organ, but from water, for example from a waterfall.

A hydraulis is an early type of pipe organ that was powered by water. It was invented in the 3rd century B.C., probably by the Hellenistic scientist Ctesibius of Alexandria. It was the world's first keyboard instrument. Many centuries later it developed into the modern pipe organ. 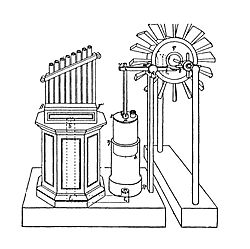 The water, having been separated from the air, leaves the camera aeolis at the same speed as it enters. It then drives a water wheel, which in turn drives the musical cylinder and the movements attached. To start the organ, the tap above the entry pipe is turned on and, given a continuous flow of water, the organ plays until the tap is closed again.

During the Renaissance many Italian gardens had water organs. The most famous water organ of the 16th century was at the Villa d'Este in Tivoli. It was about 6 metres high and was powered by a beautiful waterfall. It could play three pieces automatically, but there was also a keyboard.

All content from Kiddle encyclopedia articles (including the article images and facts) can be freely used under Attribution-ShareAlike license, unless stated otherwise. Cite this article:
Water organ Facts for Kids. Kiddle Encyclopedia.