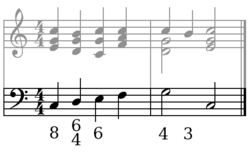 An example of figured bass: only the bass part (left hand) with the figures would be written. The chords in the right hand show how it might be played. The figures give the intervals from the bass note up. If no figure is given the chord is a 5 3 chord (an ordinary triad)

Basso continuo is a form of musical accompaniment used in the Baroque period. It means "continuous bass".

It was not usual to write out all the notes for the keyboard player. The composer normally just wrote the bass line which would be played by the left hand and doubled on the other bass instrument. The composer would indicate what the harmony should be (which chords should be played) by writing figures underneath the music.

All content from Kiddle encyclopedia articles (including the article images and facts) can be freely used under Attribution-ShareAlike license, unless stated otherwise. Cite this article:
Basso continuo Facts for Kids. Kiddle Encyclopedia.