The violone (pronounced: "Vee-o-LOH-ne") is a very big string instrument that used to be used in the 16th and 17th centuries. It is like a double bass, but it belongs to the viol family. The name "violone" means "large viol". It was really a "double-bass viola da gamba". It usually had six strings, and the fingerboard had frets (like a guitar) which showed where to put the fingers of the left hand to make the notes. The bow was held underhand (with the palm of the hand facing up). 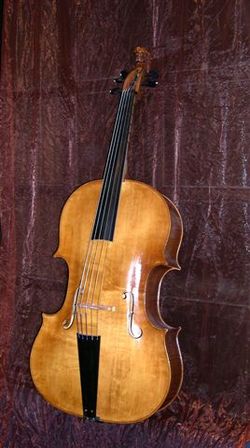 A violone made by Amit Tiefenbrunn

The violone is sometimes heard today in early music groups who are playing Renaissance and early Baroque music music. The instruments used today are usually ones that have been made recently to look and sound like the old ones.

Use of the name "violone" in organs

In organs "Violone" is the name given to a soft organ stop made of metal or wood, usually in the pedals.

All content from Kiddle encyclopedia articles (including the article images and facts) can be freely used under Attribution-ShareAlike license, unless stated otherwise. Cite this article:
Violone Facts for Kids. Kiddle Encyclopedia.