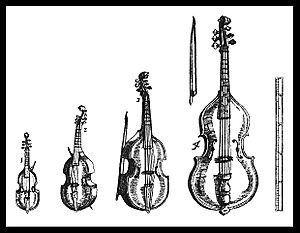 The viol (rhymes with "mile") is a string instrument that is played with a bow. The viol was a popular instrument from the 15th to the 18th century. Small viols are held on the lap, and the larger ones are held between the knees, which gave them the name of "viol da gamba", meaning a leg viol. The bow is held with the palm of the hand facing upwards: the other way round from today's bowhold for violins, violas or cellos. The viol is a gentle-sounding instrument. When the violin family became popular in the 17th century and people started to go to concerts in large concert halls, and to operas, the viols became less important. They were never used in orchestras.

Viols are made of wood, and are similar to the violin family. Most viols have six strings, although this number did vary during the centuries. The strings were made of gut, and are not as tight as on a violin. The fingerboard has frets like a guitar, except that they were also made of gut. They were tied around the fingerboard, and could be moved for tuning. These frets help the player to find the exact place to put their fingers. Sometimes the top of the scrolls on the fingerboard were beautifully decorated. The instruments have sloped shoulders and a flat back. The viol, like the vihuela, from which it developed, has a bridge that is flatter than the bridge of a modern violin. This makes it easier to play chords. The bow was convex in shape, where a violin bow is concave.

Viols were made in different sizes. A set of viols of different sizes - perhaps four or five instruments - were sometimes kept together in a chest (large box) which is why they were called a "chest of viols". When they were played together people talked of a "consort of viols". A consort would normally have at least one treble, tenor and bass instrument. A "broken consort" meant a mixture of different instruments: viols, recorders etc. Lute and bass viol were often played together. They were tuned in fourths, with a major third in the middle.

The strings of a bass viol (equivalent to the cello in the modern violin family) are tuned (from the lowest note, nearly two octaves below middle C, upwards) to D - G - C - E - A -D. The tenor viol was often called a viola da gamba (literally: "viol of the leg"). It was the most popular size for solo music and many composers wrote sonatas for the viola da gamba. The biggest viol is called the violone. It developed into the modern double bass. This is why the double bass is a little different in shape from the violin, viola and cello. Some double bass players today hold the bow with the palm (inside) of the hand facing upwards, like viol players. 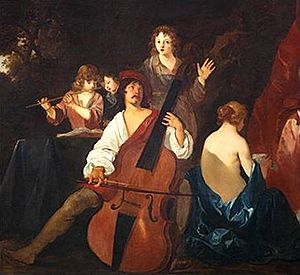 Violone or great bass viol. Painting by Sir Peter Lely, c. 1640, Dutch-born English Baroque era painter. The instrument is very big, quite Italian in shape and it has square shoulders and modern F-holes.

The viol was popular in the houses of rich people, and in the royal court. During the reign of Elizabeth I and, later, King Charles I composers such as William Byrd, John Dowland, Orlando Gibbons, John Jenkins and William Lawes wrote viol music. Solo sonatas were written by many composers including Marin Marais, Johann Sebastian Bach, and Karl Friedrich Abel. Some of the last and greatest fantasies for viol consort were written by Henry Purcell.

After the mid-18th century people forgot about the viol until the 20th century when there was a new interest in early music and people like Arnold Dolmetsch started making them again so that Renaissance and Baroque viol music could be played. Today there are many societies for people who are interested in playing the viol.

There are now many societies for people with an interest in the viol. One of these, The Viola da Gamba Society has a worldwide membership. Some modern composers have also written for the viol e.g. John Tavener, Sally Beamish, Thea Musgrave, Tan Dun and Poul Ruders. There is a group called Fretwork which perform viol music.

All content from Kiddle encyclopedia articles (including the article images and facts) can be freely used under Attribution-ShareAlike license, unless stated otherwise. Cite this article:
Viol Facts for Kids. Kiddle Encyclopedia.