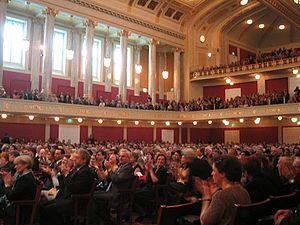 The large hall of the Wien Konzerthaus (Vienna Concert House). The stage is off to the left of the photo.

Some concert halls are purpose-built. That means they were built to be concert halls. Other concert halls may have been something else many years ago, e.g. a Corn Exchange (a place where farmers used to sell their corn) and the building has later been changed into a concert hall. Purpose-built concert halls started about the beginning of the 20th century. At that time scientists began to understand the importance of good acoustics (somewhere where the sound was good).

Concert halls that are purpose-built usually have fixed seating (seats that cannot be moved). Some halls may have seats that can be moved, either by stacking them in small piles, or tiered seating that can fold up. This allows the hall to be used for other things, e.g. dancing. 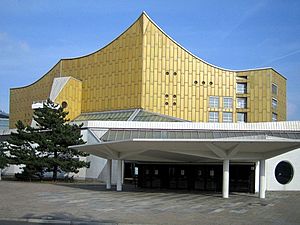 A concert hall is usually a big hall: big enough for an orchestra to be on the stage. A small concert hall, designed for just a few performers (as in chamber music) may be called a “recital hall”.

Some concert halls are especially famous. In London there is the Royal Festival Hall on the banks of the river Thames, the Barbican Centre in the City (near St Paul’s Cathedral) and the Royal Albert Hall in Kensington which is used for other events as well. There is also a famous recital hall called the Wigmore Hall. New York has the Carnegie Hall, Vienna has the Vienna Musikverein with a beautiful hall called the Golden Hall where the famous New Year’s Day concerts are given. In Germany there is the Berliner Philharmonie in Berlin and the Gewandhaus in Leipzig. In Amsterdam there is the Concertgebouw (which means: "concert hall").

All content from Kiddle encyclopedia articles (including the article images and facts) can be freely used under Attribution-ShareAlike license, unless stated otherwise. Cite this article:
Concert hall Facts for Kids. Kiddle Encyclopedia.