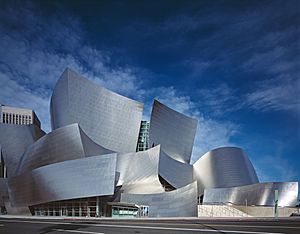 The Walt Disney Concert Hall is a concert hall in Los Angeles, California. It is the home of the Los Angeles Philharmonic orchestra. It seats 2,265 people.

The building opened in 2003. It was designed by Frank Gehry. The acoustics of the hall are very good.

The hall has a very large pipe organ which was completed in 2004. It was built by the German organ builder, Caspar Glatter-Götz. It has 6,125 pipes.

All content from Kiddle encyclopedia articles (including the article images and facts) can be freely used under Attribution-ShareAlike license, unless stated otherwise. Cite this article:
Walt Disney Concert Hall Facts for Kids. Kiddle Encyclopedia.