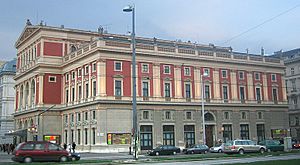 The Musikverein in Vienna, Austria is one of the most famous concert halls in the world. It was opened on 6 January 1870. The Musikverein is where the world famous Vienna Philharmonic Orchestra perform.

The concert hall was built by the Gesellschaft der Musikfreunde (Society of Friends of Music) who had been given the land by Emperor Franz Joseph. In 1907 a beautiful organ was put in the Konzerthaus by the Austrian firm of organ builders Rieger.

The main auditorium is called the Goldener Saal (The Golden Hall). There are seats for 1,744 people and standing room for another 300. Every year on 1 January the Vienna New Year's Concert is held here. Millions of people in countries all over the world watch this concert on New Year's Day.

All content from Kiddle encyclopedia articles (including the article images and facts) can be freely used under Attribution-ShareAlike license, unless stated otherwise. Cite this article:
Musikverein Facts for Kids. Kiddle Encyclopedia.