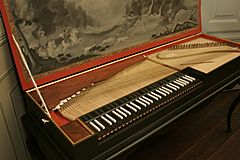 The clavichord is an example of a period instrument.

Period instruments are musical instruments which have been made in the same way that they were hundreds of years ago so that old music will sound like it used to when it was first composed.

Musical instruments have changed a lot during the last few centuries. Composers like Johann Sebastian Bach (1685-1750) wrote music for instruments which sounded different from the way they do today. Although most of the orchestral instruments we use nowadays were already in use in Bach’s day, instrument makers have made changes to them. These changes often gave the instruments a bigger sound so that they could be heard well in big concert halls. Orchestras also have increased in size.

During the 20th century musicians started to realize that the way we play the music of Bach and other composers from the past was making the music sound rather different from the way it would first have been heard. People became interested in hearing what the music would have sounded like back in the 17th and early 18th centuries (the Baroque period). Very few of the old instruments still existed and those that had survived had been “modernized”. So instrument makers started to make instruments in the old ways. Some musicians and orchestras started to play these instruments. The instruments are often called “period instruments” (or "authentic instruments" or "historical instruments") because they are made so that they are like instruments of older periods of history.

Development of the Instruments

Today's instruments of the string family (violin, viola, cello and double bass) may look almost the same as the old ones, but there are differences: the old fingerboards were shorter and the strings used to be made of gut, not metal. The bows were shaped differently, and the technique of playing was also different.

Woodwind instruments have changed a lot since the old times. Flutes, oboes and bassoons hardly had any keys (the metal keys which help to cover the holes). The keys were added in the 18th century and it made it much easier to play difficult music with lots of sharps and flats. Clarinets were not invented until the late 18th century, but even they have developed a lot since Mozart’s time (1756-1791).

Brass instruments like the trumpet and French horn now have valves which make it easier to play in different keys. The trombone is the only instrument which has not changed. The tuba was invented in the early 19th century.

Percussion instruments include the timpani which have changed a lot. In Baroque times they had calf-skin heads but now the heads are made of plastic. This makes a very different sound.

Baroque keyboard instruments included the harpsichord and clavichord. The piano was invented during the 18th century. It still sounded very different when Mozart wrote for it. The frame was made of wood, not of cast iron, and the hammers had leather heads instead of felt. A modern piano sounds quite different.

Does old music sound better on period instruments? Musicians do not all agree about this question and they still argue a lot about the way that some of the music should be played. However, it is important to listen to the way that period instruments are played. Musicians such as the violinist Andrew Manze have done a lot of research in old books and old music and have done a lot to make people rethink the way in which music from former centuries should be performed. 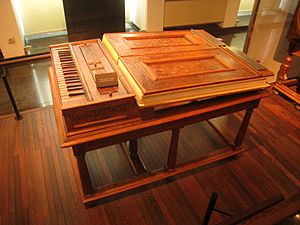 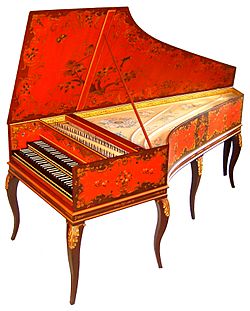 A double-manual harpsichord after Jean-Claude Goujon (1749).

All content from Kiddle encyclopedia articles (including the article images and facts) can be freely used under Attribution-ShareAlike license, unless stated otherwise. Cite this article:
List of period instruments Facts for Kids. Kiddle Encyclopedia.