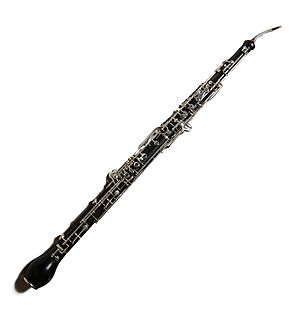 The cor anglais, or English horn, is a double reed instrument in the woodwind family. It is very similar to an oboe, but as it is longer than an oboe it plays lower notes.

The bell (the bit at the end of the instrument) is shaped like a pear. This gives it a less nasal sound (the sound of the cor anglais is less as if played through the nose). The reed is not fixed to a piece of cork like the oboe reed but it is put straight onto the short piece of metal (called a "bocal") at the top of the instrument.

The word "cor anglais" is a French word which literally means "English horn", but the cor anglais is neither English nor a horn. No one is sure how it got its name, but many people think it is because the bocal at the top is curved (the French word for curved, "anglé" is pronounced like the word for English "anglais").

There are few solo pieces for the instrument, but mostly it is used for solo melodies in slow pieces for orchestra because it can sound very expressive.

Some famous examples of cor anglais solos can be found in:

All content from Kiddle encyclopedia articles (including the article images and facts) can be freely used under Attribution-ShareAlike license, unless stated otherwise. Cite this article:
Cor anglais Facts for Kids. Kiddle Encyclopedia.