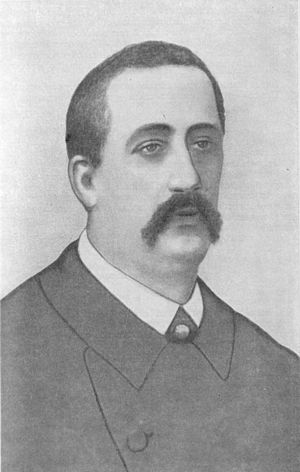 Alexander Porfir'yevich Borodin (born St. Petersburg October 12th 1833; died St. Petersburg February 27 1887) was a Russian composer. Like many Russian composers of the 19th century he was an amateur musician. His main job was Professor of Chemistry at the University of St Petersburg. He had to compose in his spare time. When he was ill he had more leisure to write music. He used to tell his friends: “Please do not say: ‘I hope you are well’, please say: ‘I hope you are ill’”. Borodin’s most famous opera is called Prince Igor. He wrote many fine songs, chamber music and orchestral music, including two symphonies. The Nocturne from his String quartet no 2 is especially well-known. In his music, Borodin showed Russian power and the heoric characters. His main means of expression was melody. When he was young he learned French, Swedish and English, but later Italian.

Borodin died of a heart attack.

All content from Kiddle encyclopedia articles (including the article images and facts) can be freely used under Attribution-ShareAlike license, unless stated otherwise. Cite this article:
Alexander Borodin Facts for Kids. Kiddle Encyclopedia.