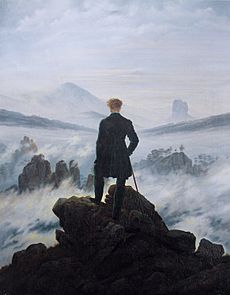 Wanderer Above the Sea of Fog, by Caspar David Friedrich is an example of Romantic painting.

In the Classical period artists liked to see clear forms. 18th century architecture nearly always shows a lot of symmetry. The gardens of the palace at Versailles are a good example of this with their very tidy patterns of straight paths, circular ponds and neatly clipped hedges.

In music the Classical composers such as Haydn, Mozart, Beethoven, and Schubert liked to compose music which had a clear plan like sonata form.

In the Romantic period artists thought that feeling and passions were more important than formal plans. This can be seen in the gardens designed by Capability Brown, e.g. in at Blenheim Palace, Oxford. The gardens are made to blend into nature.

In music the Romantic composers may still use plans like sonata form, but feelings and passions are important. They often write what is called programme music which means: music that describes something or tells a story. Beethoven’s Sixth Symphony is called the “Pastoral” which means that it is about the countryside. Although Beethoven is usually called a composer of the Classical period he is also an early Romantic. Later composers such as Felix Mendelssohn wrote pieces like Hebrides Overture which describes the sea coming into Fingal’s Cave in the Hebrides Islands in Scotland. Hector Berlioz (1803-1869) wrote a lot of music which tells a story. His Symphonie Fantastique is about an artist madly in love. Berlioz’s whole way of life was wild and romantic. He fell in love with an actress he saw on stage playing the part of Juliet in Shakespeare’s Romeo and Juliet and he actually married her! Other composers who wrote a lot of programme music include Franz Liszt (1811-1886) and Richard Strauss (1864-1949). Strauss always wrote in a late-Romantic style even although he lived well into the 20th century.

The Romantic period was also the period of Nationalism. "Nationalism" means being proud of one's country. In the 19th century a lot of European countries as we know them were being formed. In music a lot of composers were writing music which was typical of their country. They often did this by using folk music. Antonín Dvořák (1841-1904) and Bedřich Smetana (1824-1884) wrote music which sounds very Czech. Pyotr Tchaikovsky (1840-1893) wrote music with Russian folk songs in them. Gustav Mahler (1860-1911) used German folk songs in his symphonies, and Ralph Vaughan Williams (1872-1958) collected English folk songs and put them in his music. One of those pieces was a Fantasy on the famous tune Greensleeves.

All content from Kiddle encyclopedia articles (including the article images and facts) can be freely used under Attribution-ShareAlike license, unless stated otherwise. Cite this article:
Romantic music Facts for Kids. Kiddle Encyclopedia.