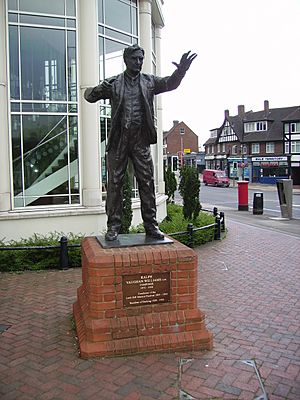 Ralph Vaughan Williams (b. Down Ampney, Gloucestershire, 12 October 1872; d. London, 26 August 1958) was the most important English composer of his generation.

Vaughan Williams always pronounced his first name “Rafe” - (“Vaughan” rhymes with “born”). His father was a rector. Ralph was very young when his father died. The family moved to Dorking near London. He went to Charterhouse School and played the viola in the school orchestra. He studied at the University of Cambridge and at the Royal College of Music where Hubert Parry was his teacher.

Vaughan Williams wanted to be a good composer, so he went abroad to study with famous composers like Max Bruch in Berlin and Maurice Ravel in Paris. Yet he knew that he must not simply imitate these composers, so he also studied English folk song. He became good friends with the composer Gustav Holst. The two men always showed one another the music they were writing so that they could help one another by offering criticism.

In 1910 he wrote a work which became one of his best-known pieces of music: the Fantasia on a theme of Thomas Tallis. The piece is for a string orchestra divided into two sections. It uses a theme by the famous 16th century composer Tallis. He also wrote hymn tunes for the English Hymnal. One of his most popular hymn tunes is the one called Sine Nomine sung to the words “For all the saints”. Another lovely work is The Lark Ascending. This is a short work for solo violin and orchestra. The violin sounds like a skylark singing in the sky. In 1934 he wrote a short piece for flute, harp and string orchestra called Fantasia on Greensleeves which is based on the famous English Renaissance tune Greensleeves.

During his long life Vaughan Williams wrote nine symphonies, works for the stage, songs, choral music and chamber music. In 1938 he wrote a famous piece called Serenade to Music for 16 solo singers and orchestra. It was one of several works he wrote inspired by Shakespeare. The words were from the play The Merchant of Venice. It was written for the 50th anniversary of Sir Henry Wood’s career as a conductor. In 1953 he wrote music for Queen Elizabeth II’s coronation, including a very short and simple motet O taste and see which has remained very popular with church choirs.

In his old age he became quite deaf. This was because of the noise of gunfire he had been exposed to when he was serving as a stretcher bearer in World War I.

His importance in English music

Some of Vaughan Williams’s best works are those where he makes his music sound like folk song. He loved the poetry of Housman and used some of the poems in a song cycle called On Wenlock Edge for tenor, piano and string quartet. His music always sounds English. He was born in the 19th century which was a time when people thought English musicians were not very good. Vaughan Williams and Edward Elgar (who was a little older) made people realise that it was possible for an Englishman to write beautiful, moving music.

All content from Kiddle encyclopedia articles (including the article images and facts) can be freely used under Attribution-ShareAlike license, unless stated otherwise. Cite this article:
Ralph Vaughan Williams Facts for Kids. Kiddle Encyclopedia.