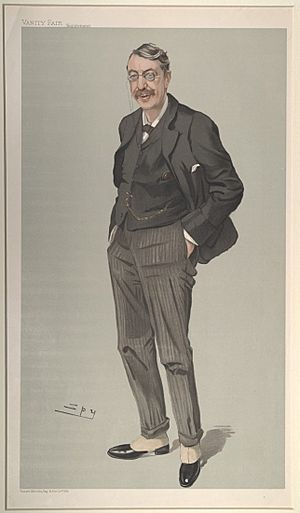 Sir Charles Villiers Stanford (born Dublin, 30 September 1852; died London, 29 March 1924) was an Irish composer who lived in England for most of his life.

Stanford was born in Dublin. His father was a very successful lawyer who was also interested in music. He played the cello and sang. Stanford’s mother played the piano. The young boy heard a lot of music at his home as there were often visitors who came to make music. Charles studied the piano, organ and composition and was composing and performing at concerts when he was still very young.

His parents had wanted their son to be a lawyer, but it was obvious that music was to be his profession. He won a scholarship to Queens' College, Cambridge in 1870 where he was a choral scholar. He learned very quickly and in 1873, while he was still a student, he was made organist of Trinity College and conductor of two choirs. While he had these jobs he was given time to make visits to Germany where he studied with Carl Reinecke and Friedrich Kiel. He met several famous composers including Brahms and Offenbach. He went to the opening of the Bayreuth Festival Theatre where the music of Richard Wagner was performed.

Stanford took his BA degree in 1874 and MA in 1878, and was given the honorary degree of D.Mus. at Oxford in 1883 and at Cambridge in 1888. He had a lot of energy and was known for working very hard. When the Royal College of Music opened in London in 1883 Stanford was made professor there. He became conductor of the Bach Choir and then he was made professor of music at Cambridge. He was still only 35 years old. He kept these two professorships until his death. Although he gave up his job as organist at Trinity he became conductor of the Leeds Triennial Festival and appeared with nearly every important British music festival. In 1902 he was knighted.

Stanford married in 1878 and the couple had two children.

Stanford died in London and was buried in Westminster Abbey.

Stanford is best known today for the choral music he wrote for the Anglican church. These includes some very fine anthems and motets as well as service settings. His music was much better than most of the church music that had been composed during the 19th century, so he helped to make British music better. He composed many pieces for music festivals: these include oratorios and cantatas as well as partsongs and solo songs. He also wrote a lot of orchestral and instrumental works. These often show the influence of Brahms and Schumann.

As a teacher of composition Stanford had a great deal of influence on many British composers. He sometimes had a bad temper, but he was also very good at showing students how they could improve their music. Composers such as Charles Wood, Constant Lambert, Vaughan Williams, Holst, Samuel Coleridge-Taylor, Rutland Boughton, John Ireland, Frank Bridge, George Butterworth, Arthur Bliss, Herbert Howells, Arthur Benjamin and Ernest J. Moeran all learned a great deal from him, and continued to admire him.

All content from Kiddle encyclopedia articles (including the article images and facts) can be freely used under Attribution-ShareAlike license, unless stated otherwise. Cite this article:
Charles Villiers Stanford Facts for Kids. Kiddle Encyclopedia.