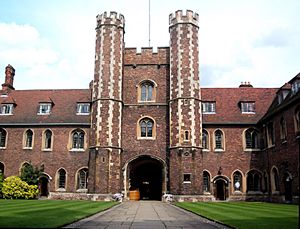 The Gatehouse, as seen from the Old Court.

The President's Lodge of Queens' is the oldest building on the river at Cambridge, dating from about 1460.

The college is on both sides of the river Cam. A bridge joins the two parts. This bridge is always called the "Mathematical Bridge". The students call the older part of the college "The Dark Side" and the newer part "The Light Side".

Many people take photographs of the college. There is a story that the bridge was designed and built by Sir Isaac Newton without the use of nuts or bolts. The story says that once some students tried to take the bridge apart and put it back together again, but were unable to do so. That is why they had to put nuts and bolts in which can be seen today. The story is not true. The bridge was built in 1749, after Newton had died. It was never taken apart although it was rebuilt twice.

Stephen Fry is one of many famous people who have studied there.

All content from Kiddle encyclopedia articles (including the article images and facts) can be freely used under Attribution-ShareAlike license, unless stated otherwise. Cite this article:
Queens' College, Cambridge Facts for Kids. Kiddle Encyclopedia.