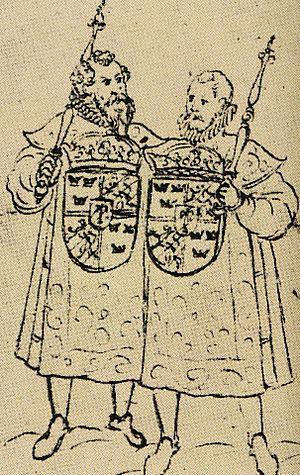 Two Swedish heralds from the year 1594

Heraldry is the art and science of designing and using a coat of arms. The study of coats of arms is also called armory. The practice of using distinct markings on a person's shield started in the Middle Ages, when a knight's helmet covered his face, making everybody look the same in battle. At first, only knights and nobility had coats of arms, but in the Middle Ages, some cities started using heraldry too. By the end of the Middle Ages, other people began using coats of arms, now called burgher arms, which means they belong to a commoner and not a member of the nobility. An official in charge of approving and recording coats of arms is called a herald. The related study of flags is called vexillology.

Heraldry is described in English using a specialised jargon called Blazon which is based on French words. Heraldry uses only bold, bright colors, called tinctures, with special names. Gold, for instance, is called Or. This word is often capitalised to distinguish it from the conjunction or. Silver and white are sometimes treated as different colors, but in English Blazon both are called argent. Some combinations of colors represent furs, and these have names that are only used in heraldry. There are a number of geometric shapes, called ordinaries, that are used in heraldry, and each of these has a special name too. The shield may be divided in a number of ways, usually following the lines of the ordinaries.

All content from Kiddle encyclopedia articles (including the article images and facts) can be freely used under Attribution-ShareAlike license, unless stated otherwise. Cite this article:
Heraldry Facts for Kids. Kiddle Encyclopedia.