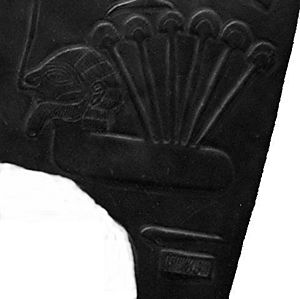 Menes was a pharaoh of the first dynasty of ancient Egypt. He lived ca. 3100-3000 BC. He brought together Upper and Lower Egypt to make an empire. He wore the Pschent or double crown: the white crown of Upper Egypt and the red crown of Lower Egypt. He built the city of Memphis and made it the capital.

There is extensive archeological evidence that there was a pharaoh named Narmer, but little evidence for Menes. It is now believed that Menes was either Narmer, his predecessor, or Hor-Aha who ruled after him.

More than 2000 years later Manetho, an Egyptian historian, wrote that Menes ruled for 62 years and was killed by a hippopotamus.

An image of Menes holding an ankh is on the frieze on the south wall of the U.S. Supreme Court building.

All content from Kiddle encyclopedia articles (including the article images and facts) can be freely used under Attribution-ShareAlike license, unless stated otherwise. Cite this article:
Menes Facts for Kids. Kiddle Encyclopedia.