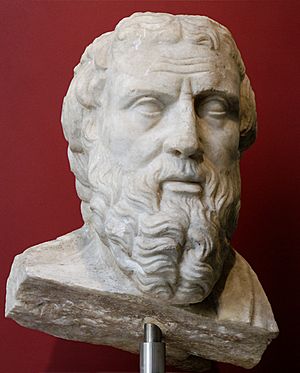 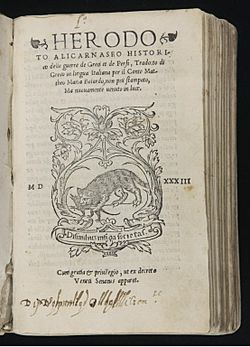 Title pages of a translation into Italian, printed in Venice, and first published in 1502

Herodotus was an Ancient Greek historian. He was born at Halicarnassus, a town in south-west Asia Minor (now Bodrum, Turkey), probably in 484 BC. He died in 425 BC.

Herodotus was called the "Father of History" by Cicero. He wrote about the ancient empires of Babylon, Egypt, and Persia, and about the Ancient Greeks.

During his life, Herodotus probably told his stories in front of large numbers of people in Greek cities. Some men at the time did this for pay. He is now most famous for his writings about the wars between the Persian Empire and the Greek city-states. He told the story from the Greek side, although the war was mostly finished when he was still a child.

In his books, Herodotus tells us that he travelled a lot. He says that he went to what is now Italy, Ukraine, Egypt, and Sicily. He may also have travelled to Babylon. He often used stories from people he met to write about other places and happenings.

Some people think that Herodotus wrote about things that were not true. That is possible, because he would have relied on information from various sources. His work is important because there is very little writing on these subjects before his works.

The works of Herodotus are available today in translations.

All content from Kiddle encyclopedia articles (including the article images and facts) can be freely used under Attribution-ShareAlike license, unless stated otherwise. Cite this article:
Herodotus Facts for Kids. Kiddle Encyclopedia.