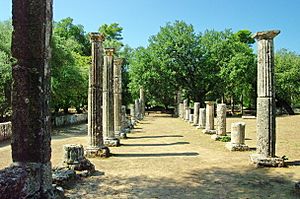 The palaestra of Olympia, a place devoted to the training of wrestlers and other athletes 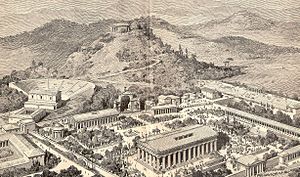 An artist's impression of ancient Olympia 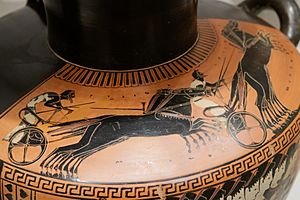 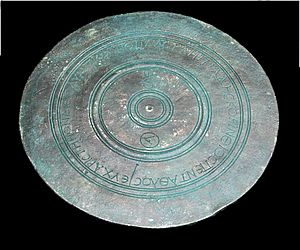 The ancient Olympic Games were originally a festival, or celebration, of and for Zeus; events such as a footrace, a javelin contest, and wrestling matches were added later. The Olympic Games were a series of athletic competitions among representatives of city-states and one of the Panhellenic Games of ancient Greece.

They were held in honor of Zeus, and the Greeks gave them a mythological origin. The first Olympics is traditionally dated to 776 BC. They continued to be celebrated when Greece came under Roman rule, until the emperor Theodosius I stopped them in AD 393 as part of the campaign to make Christianity as the State religion of Rome.

The games were held every four years, or Olympiad, which became a unit of time in historical chronologies.

During the celebration of the games, an Olympic Truce was made so that athletes could travel from their cities to the games in safety. The prizes for the victors were olive leaf wreaths or crowns.

The games became a political tool used by city-states to assert dominance over their rivals. Politicians would announce political alliances at the games, and in times of war, priests would offer sacrifices to the gods for victory.

The games were also used to help spread Hellenistic culture throughout the Mediterranean. The Olympics also featured religious celebrations. The statue of Zeus at Olympia was counted as one of the seven wonders of the ancient world. Sculptors and poets would come together each Olympiad to display their works of art to would-be customers.

The ancient Olympics had fewer events than the modern games, by the time of the Classical Greek culture, in the fifth and fourth centuries BC, the games were restricted to male participants and only freeborn Greek men were allowed to participate, although there were victorious women chariot owners. As long as they met the entrance criteria, athletes from any Greek city-state and kingdom were allowed to participate.

The games were always held at Olympia rather than moving between different locations as is the practice with the modern Olympic Games. Victors at the Olympics were honored, and their feats recorded for future generations.

The Olympic games were held to be one of the two central rituals in ancient Greece, the other being the much older religious festival, the Eleusinian Mysteries. They were established to serve as a venue for representatives of the city-states to peacefully compete against each other.

The games first started in Olympia, Greece, in a sanctuary site for the Greek deities near the towns of Elis and Pisa.

The only competition held then was the stadion race, a race over about 190 metres (620 feet), measured after the feet of Hercules. The word stadium is derived from this foot race. 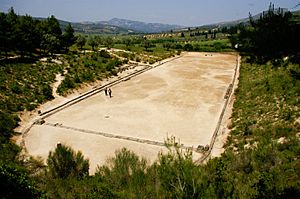 The stadion of ancient Nemea, Greece

The games were in decline for many years but continued past AD 385, by which time flooding and earthquakes had damaged the buildings and invasions by barbarians had reached Olympia. In 394 Theodosius I banned all pagan festivals, but archaeological evidence indicates that some games were still held. 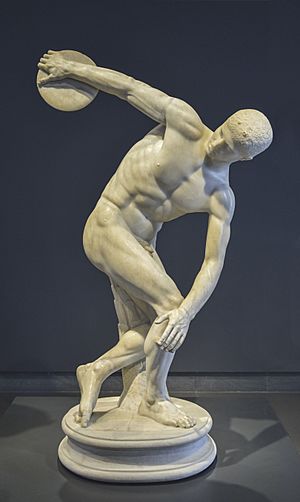 The "Discobolus" is a copy of a Greek statue c. 5th century BC. It represents an ancient Olympic discus thrower

The ancient Olympics were as much a religious festival as an athletic event. The games were held in honor of the Greek god Zeus, and on the middle day of the games, 100 oxen would be sacrificed to him.

Over time Olympia, the site of the games, became a central spot for the worship of the head of the Greek pantheon and a temple was erected on the mountaintop. The temple was one of the largest Doric temples in Greece.

The Sanctuary of Zeus in Olympia housed a 13-metre-high (43 ft) statue in ivory and gold of Zeus which was placed on a throne in the temple, that had been sculpted by Phidias circa 445 BC. This statue was one of the ancient Seven Wonders of the World.

Artistic expression was a major part of the games. Sculptors, poets, painters and other artisans would come to the games to display their works in what became an artistic competition. Sculptors created works like Myron's Diskobolos or Discus Thrower.

Their aim was to highlight natural human movement and the shape of muscles and the body. Poets would be commissioned to write poems in praise of the Olympic victors. Such victory songs were passed on from generation to generation. 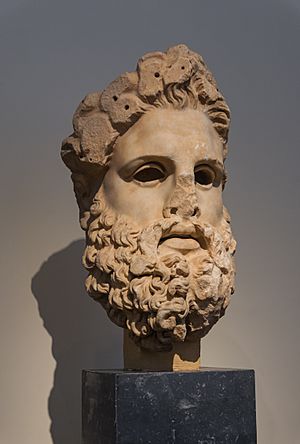 The games were held in honor of the God Zeus 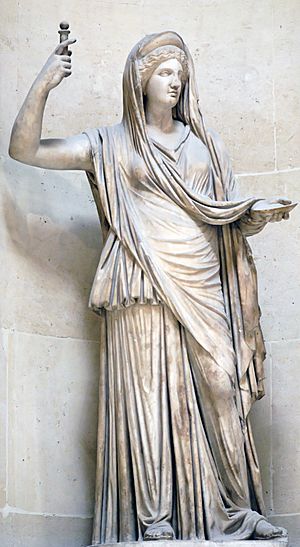 Hera was also honored at the Games

Apparently starting with just a single foot race, the program gradually increased to twenty-three contests, although no more than twenty featured at any one Olympiad. Participation in most events was limited to male athletes except for women who were allowed to take part by entering horses in the equestrian events.

Youth events are recorded as starting in 632 BC. Our knowledge of how the events were performed mainly comes from the paintings of athletes found on many vases, particularly those of the Archaic and Classical periods.

Differences between the ancient and modern Olympic Games 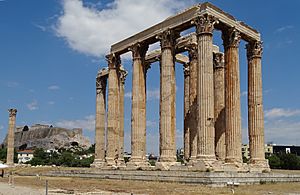 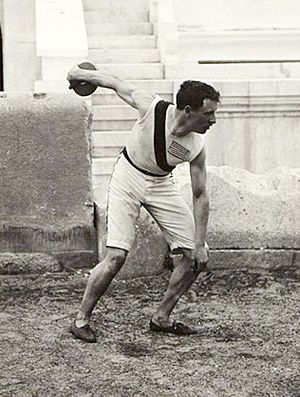 Robert Garrett throwing a discus at the 1896 Summer Olympics. The ancient Olympics also had the discus throwing event

All content from Kiddle encyclopedia articles (including the article images and facts) can be freely used under Attribution-ShareAlike license, unless stated otherwise. Cite this article:
Ancient Olympic Games Facts for Kids. Kiddle Encyclopedia.