Ancient Greek boxing dates back to at least the 8th century BC (Homer's Iliad), and was practiced in a variety of social contexts in different Greek city-states.

Most sources about ancient Greek boxing are fragmentary or legendary, making it difficult to reconstruct the rules, customs and history surrounding this activity in great detail. Still, it is clear that gloved boxing bouts were a significant part of ancient Greek athletic culture throughout the early classical period. 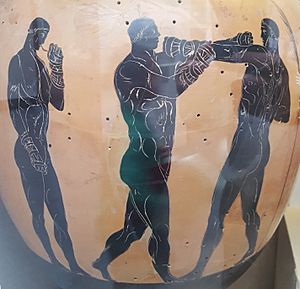 Two boxers and a referee - Greek 7th-5th centuries BC

There is archaeological and artistic evidence of ancient Greek boxing in Αncient Greece as early as the Minoan and Mycenaean periods.

There are numerous legends about the origins of boxing in Greece. One legend holds that the heroic ruler Theseus invented a form of boxing in which two men sat face to face and beat each other with their fists.

In time, the boxers began to fight while standing and wearing gloves and wrappings on their arms below the elbows, but otherwise they fought naked. 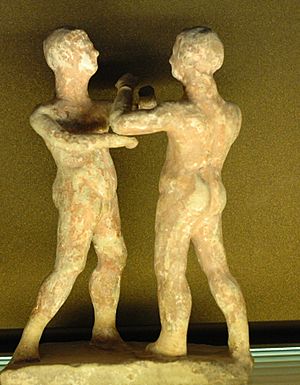 The rules for the sport were:

Unlike modern boxing, the Greeks did not enclose the competitors in a ring to encourage fighting in close quarters.

Therefore, most boxers fought defensively as opposed to offensively to encourage patience and caution. In addition, boxing in Ancient Greece was not divided into individual rounds. Competitors fought until finish, usually by surrender or mutual exhaustion.

All content from Kiddle encyclopedia articles (including the article images and facts) can be freely used under Attribution-ShareAlike license, unless stated otherwise. Cite this article:
Ancient Greek boxing Facts for Kids. Kiddle Encyclopedia.