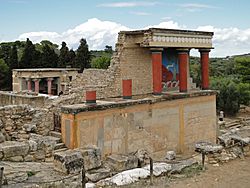 Knossos is a Bronze Age archaeological site on the island of Crete. It is at modern Heraklion. It may be Europe's oldest city.

Many Roman coins found on the site had 'Knosion' or 'Knos' on one side, and an image of a Minotaur or Labyrinth on the reverse. These are symbols from the myth of King Minos, supposed to have reigned at Knossos.

The excavations at Knossos began in 1900 by the English archaeologist Sir Arthur Evans (1851–1941) and his team. They worked there for 35 years. The palace was excavated and partly restored. It was large. The team discovered two ancient scripts, called Linear A and Linear B. From the layering of the palace, Evans developed an idea of the civilization that used it, which he called Minoan. The palace was built over a previous Neolithic town. During the Bronze Age, the town surrounded the hill on which the palace was built.

The palace was abandoned at some unknown time at the end of the late Bronze Age, c. 1380–1100 BC, for reasons which are not known.

All content from Kiddle encyclopedia articles (including the article images and facts) can be freely used under Attribution-ShareAlike license, unless stated otherwise. Cite this article:
Knossos Facts for Kids. Kiddle Encyclopedia.