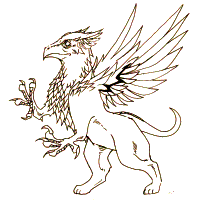 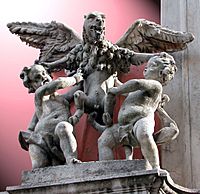 The griffin or gryphon (less often called gryphen, griffon, griffen, or gryphin) is a legendary creature, an animal belonging to the world of mythology, story telling and fantasy. It has the body, tail, and back legs of a lion; the head and wings of an eagle; and sometimes an eagle's talons as its front feet.

In the past griffin was a symbol of strength and dexterity. It often looked after a treasure.

The Griffin is used as the symbol for Brisbane Waters Secondary College on the Central Coast of New South Wales, Australia. following the griffin is the Collegiate phrase "Strength Through Unity"

There is evidence of representations of griffins in Ancient Iranian and Ancient Egyptian art dating back to before 3000 BC. In Egypt, a griffin can be seen in a cosmetic palette from Hierakonpolis, known as the "Two Dog Palette", which is dated to ca. 3300-3100 BC. In Iran, griffins appeared on cylinder seals from Susa as early as 3000 BC. Griffin depictions appear in the Levant, Syria, and Anatolia in the Middle Bronze Age, dated at about 1950-1550 BC. Early depictions of griffins in Ancient Greek art are found in the 15th century BC frescoes in the Throne Room of the Bronze Age Palace of Knossos, as restored by Sir Arthur Evans. It continued being a favored decorative theme in Archaic and Classical Greek art. 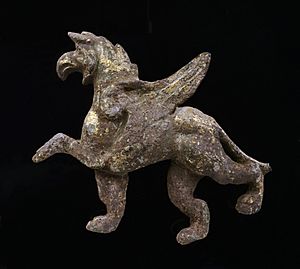 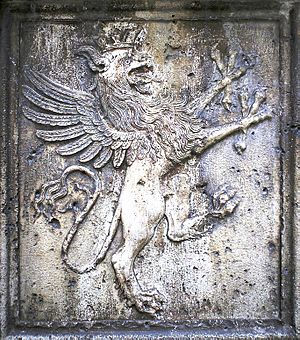 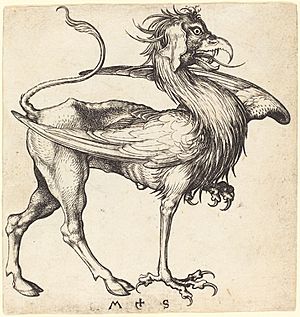 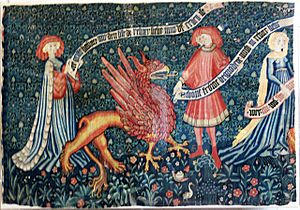 In Central Asia, the griffin appears about a thousand years after Bronze Age Crete, in the 5th–4th centuries BC, probably originating from the Achaemenid Persian Empire. The Achaemenids considered the griffin "a protector from evil, witchcraft and secret slander". The modern generalist calls it the lion-griffin, as for example, Robin Lane Fox, in Alexander the Great, 1973:31 and notes p. 506, who remarks a lion-griffin attacking a stag in a pebble mosaic at Pella, perhaps as an emblem of the kingdom of Macedon or a personal one of Alexander's successor Antipater.

The Pisa Griffin is a large bronze sculpture that has been in Pisa in Italy since the Middle Ages, though it is of Islamic origin. It is the largest bronze medieval Islamic sculpture known, at over three feet tall (42.5 inches, or 1.08 m.), and was probably created in the 11th century in Al-Andaluz (Islamic Spain). From about 1100 it was placed on a column on the roof of Pisa Cathedral until replaced by a replica in 1832; the original is now in the Museo dell' Opera del Duomo (Cathedral Museum), Pisa.

All content from Kiddle encyclopedia articles (including the article images and facts) can be freely used under Attribution-ShareAlike license, unless stated otherwise. Cite this article:
Griffin Facts for Kids. Kiddle Encyclopedia.