The Gryphon is a fictional character devised by Lewis Carroll in the popular 1865 book Alice's Adventures in Wonderland. True to the conventional view of a griffin, he has the head, talons, and wings of an eagle and the body of a lion.

The Gryphon appears to be somewhat overbearing and dismissive of the obsessions and dismays of other characters, such as the Mock Turtle's sorrow and the Queen of Hearts' executions, neither of which (according to the Gryphon) have any basis in fact. He speaks with a slightly ungrammatical Cockney-like accent and makes demands of the Mock Turtle, which are obeyed despite the latter creature's implicit objections. In addition, he is prone to making cough-like sounds written as "Hjckrrh!", which seem to have little meaning and may be involuntary.

In Alice's Adventures in Wonderland, the Gryphon features with the Mock Turtle in Chapter 9, "The Mock Turtle's Story", Chapter 10, "The Lobster Quadrille", and briefly at the start of Chapter 11, "Who Stole the Tarts?". The Gryphon was ordered by the Queen to take Alice to meet the Mock Turtle; this he did, and stayed with them for a long time, demanding that the Mock Turtle tell its history, as well as several poems. The two creatures go on to explain certain features of their world which are apparently nonsense to Alice, before Alice and the Gryphon are summoned to a criminal trial, leaving the Mock Turtle behind. 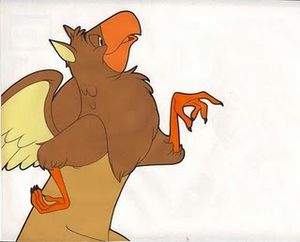 The Gryphon from an advertisement

All content from Kiddle encyclopedia articles (including the article images and facts) can be freely used under Attribution-ShareAlike license, unless stated otherwise. Cite this article:
Gryphon (Alice's Adventures in Wonderland) Facts for Kids. Kiddle Encyclopedia.