The Cathedral Church of St Peter and St Wilfrid, commonly known as Ripon Cathedral, and until 1836 known as Ripon Minster, is a cathedral in the North Yorkshire city of Ripon. Founded as a monastery by Scottish monks in the 660s, it was refounded as a Benedictine monastery by St Wilfrid in 672. The church became collegiate in the tenth century, and acted as a mother church within the large Diocese of York for the remainder of the Middle Ages. The present church is the fourth, and was built between the 13th and 16th centuries. In 1836 the church became the cathedral for the Diocese of Ripon. In 2014 the Diocese was incorporated into the new Diocese of Leeds, and the church became one of three co-equal cathedrals of the Bishop of Leeds.

The cathedral is notable architecturally for its gothic west front in the Early English style, considered one of the best of its type, as well as the Geometric east window. The seventh-century crypt of Wilfrid's church is a significant example of early Christian architecture in England. The cathedral has Grade I listed building status.

There has been a stone church on the site since 672 when Saint Wilfrid replaced the previous timber church of the monastery at Ripon (a daughter house of Saint Aidan's monastery at Melrose) with one in the Roman style. This is one of the earliest stone buildings erected in the Anglo-Saxon Kingdom of Northumbria. The crypt dates from this period.

People have been going to worship and pray at Ripon for more than 1,300 years. The cathedral building is part of this continuing act of worship, begun in the 7th century when Saint Wilfrid built one of England's first stone churches on this site, and still renewed every day. Within the nave and choir, you can see the evidence of 800 years in which master craftsmen have expressed their faith in wood and stone. 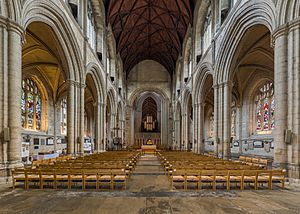 The nave, showing a clear asymmetry in the arches 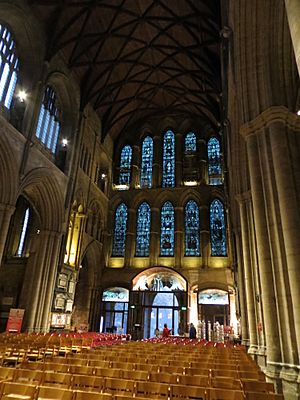 Today's church is the fourth to have stood on this site. Saint Wilfrid brought stonemasons, plasterers and glaziers from France and Italy to build his great basilica in AD 672. A contemporary account by Eddius Stephanus tells us:

In Ripon, Saint Wilfrid built and completed from the foundations to the roof a church of dressed stone, supported by various columns and side-aisles to a great height and many windows, arched vaults and a winding cloister.

Saint Wilfrid was buried in this church near the high altar. Devastated by the English king Eadred in AD 948 as a warning to the Archbishop of York, only the crypt of Wilfrid's church survived but today this tiny 7th-century chapel rests complete beneath the later grandeur of Archbishop Roger de Pont l’Evêque’s 12th century minster. A second minster soon arose at Ripon, but it too perished — this time in 1069 at the hands of William the Conqueror. Thomas of Bayeux, first Norman Archbishop of York, then instigated the construction of a third church, traces of which were incorporated into the later chapter house of Roger's minster.

The Early English west front was added in 1220, its twin towers originally crowned with wooden spires and lead. The east window was built as part of a reconstruction of the choir between 1286-8 and 1330, and was described by architecture critic Pevsner as a 'splendid' example of the series of large Decorated gothic windows constructed in Northern England. Major rebuilding had to be postponed due to the outbreak of the Wars of the Roses but resumed after the accession of Henry VII and the restoration of peace in 1485. The crossing tower was rebuilt after it collapsed in an earthquake in 1450 but was never completed. Between 1501 and 1522 the nave walls were raised higher and the aisles added. The church's thirty-four misericords were carved between 1489 and 1494. The same (Ripon) school of carvers also carved the misericords at Beverley Minster and Manchester Cathedral. But in 1547, before this work was finished, Edward VI dissolved Ripon's college of canons. All revenues were appropriated by the Crown and the tower never received its last perpendicular arches. It was not until 1604 that James I issued his Charter of Restoration.

During the civil war, much of the stained glass was smashed and some of the statues were destroyed.

The minster finally became a cathedral (the church where the Bishop has his cathedra or throne) in 1836, the focal point of the newly created Anglican Diocese of Ripon — the first to be established since the Reformation.

The current director of music is Andrew Bryden, with Tim Harper as Assistant Director of Music.

The cathedral has a fine organ by Harrison and Harrison, which is a rebuild of the original Lewis instrument dating from 1878. The organ is on the screen and has casework by Gilbert Scott. A specification of the organ can be found on the National Pipe Organ Register. The organ last underwent a major refurbishment in 2013. These works included a thorough cleaning and repair of all pipe work.

In 1447, the organ at Ripon Cathedral was played by a priest, Thomas Litster. Notable organists have included composers Charles Harry Moody and Ronald Edward Perrin.

All content from Kiddle encyclopedia articles (including the article images and facts) can be freely used under Attribution-ShareAlike license, unless stated otherwise. Cite this article:
Ripon Cathedral Facts for Kids. Kiddle Encyclopedia.